Some culinary artists are social butterflies. Any trendy breeze that musses their locks changes their aesthetic. They zig, then they zag. Whatever criticism one might make of Alfred Portale, the long-time chef at Gotham Bar and Grill, inconstancy is not among them. Portale was one of the key figure in the movement that reached its zenith in the 1980s to treat food as architecture: a form of vertical cuisine. In the history culinary fads and fashions, vertical cuisine seems a bit like a hiccup, but it was a moment that provoked astonishment and it literally provided chefs with a new dimension. It gave cooks air rights. One of the greatest meals of my life was a tribute to this architectural cuisine at 24 Miramar in Jacksonville, Florida (now, apparently, closed - the restaurant, not the city.) The man behind this design was Alfred Portale, and his Gotham Bar and Grill has impressed New Yorkers for two decades, a culinary philosophy for a city always looking up.

Portale is a greater designer than chef, although this is not to denigrate his kitchen skills. His Village restaurant is one of the most stunningly elegant rooms in town, a room that demands examination from floor to ceiling. The floral arrangements are a tribute to the food or perhaps it is the reverse, but both are tributes to the transcending of gravity.

Having had a very satisfying meal at Gotham some years ago, I recently visited at lunch. I rarely dine out at lunch, but this could well have been the impressive lunch during my New York stay even had I a larger sample. It is true that the flavors did not equal the visual impact, but lunch was not mere packaging, although one might wish that the waiters uncovered the dishes with a flourish to stun one's eyes and take one's breath.

I began with the Warm Mushroom Salad with Frisée, Crisp Bacon, Aged Goat Cheese, and Sherry Vinaigrette. Portale presents a decolletage cuisine; one wonders what engineering feat holds it up. I was astonished. The grated Parmesan-like cheese covering the frisée hinted of snow on cedar. The problem was snow depth. The cheese overwhelmed the greens. If one shook the cheese off to the side (my eventual strategy), the dish was quite satisfying, but when Portale chooses between eye and tongue, the former always receives the nod. 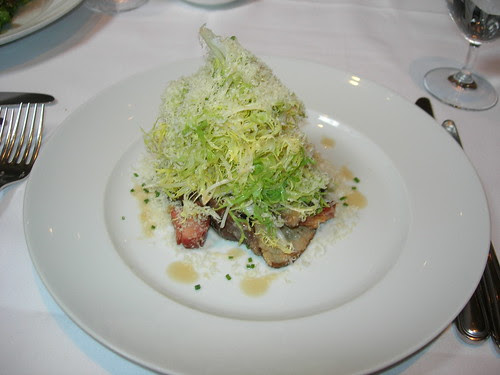 As a main course I selected Moroccan Spiced Rack of Lamb with Couscous Salad, Roasted Eggplant and Lemon-Black Pepper Jus. If there is a single food stuff that God placed on earth for the pleasure of Alfred Portale, it is surely rack of lamb, and the chef did not fail this gift. The plate was a roller-coaster of heights and depths, colors and textures. The lamb was superb, as was its jus. I was less impressed by the couscous and eggplant, which to my taste, lacked the airy and mysterious spices of the Casbah. This was Bogart's Casablanca, not the Bey's. 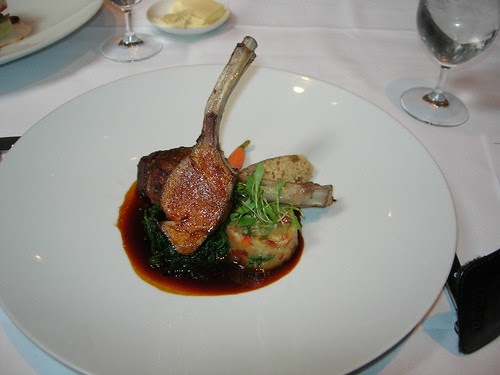 While the Apple Pecan Tart is the stunner among desserts, a an impossible crown of baked cream, I ordered Vanilla Roasted Pears with White Chocolate Polenta and Orange Saffron Ice Cream. Desserts at Gotham may be a bit less startling than main courses, if only because Vertical Cuisine seems have had a greater impact on pastry chefs, who have the luxury of building plates without the insistent pressure of servers and diners. Like many desserts, mine was a fantasia of shape and color. The pears and polenta were sumptuous. The orange saffron ice cream lacked the acidity that makes dessert a cleansing ritual. The idea of combining orange and saffron must have seemed inspired, but as served this inspiration became insipid. 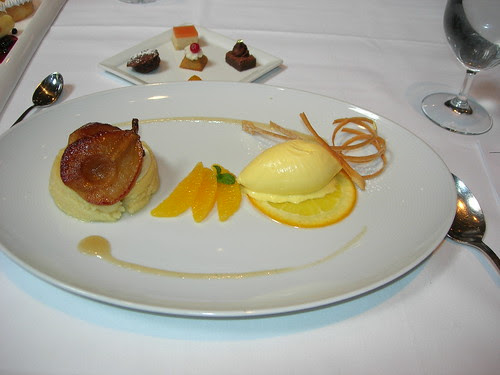 Gotham is one of the essential New York restaurants, and Portale an essential chef. As a diner I am grateful that he stokes the fire of the third dimension. Sometimes he forgets that taste is a fourth dimension - or the first dimension - but after twenty years he has persuaded many diners that cuisine can touch the heavens. Alfred Portale is Antoni Gaudi of the stove.