When I arrived at Saison, I was uncertain what to expect. The restaurant is tucked away in a slightly sketchy courtyard in the lively but mixed industrial Mission district. Saison has been open a few months now, but doesn’t have the buzz-factor of a restaurant such as Benu.

The website indicates that the chef, Joshua Skenes, prefers using “primitive techniques” such as ember and ash cooking. Could wooly mammoth be in the offing? (Much of the rest of the description of Saison’s philosophy seems industrial-strength farm-to-table boilerplate.) Skenes had been chef at Chez TJ, and the website mentions, somewhat oddly, that Skenes had received perfect grades while a student at the French Culinary Institute of New York, akin to advertising a cardiologist’s medical school transcript.

Upon entering the stylish 2010 comfort space one is confronted with a large brick fireplace filled with those embers mentioned above. No need to sit on rocks, using bone implements.

Although one might imagine that a restaurant that embraced its inner Cro-Magnon might lean toward muscular protein, Saison dances with vegetables, and waltzes well. This night the protein was secondary (and, in fact, a radish plate was replaced with mackerel, and had radishes been at peak only a single dish, squab, would have been starred animal protein).

Dinner began with Tomatoes and Melons with Riesling Vinegar, a lovely, if brief, amalgam of garden and field. The dish hovered between sweet fruit and tart vegetable, as is proper for tomato inspiration, bolstered by a grapy vinegar. The presentation was calm and supple with a slight aspic air. (The amuse – caviar and corn beignet – came next, a successful mini-bite). 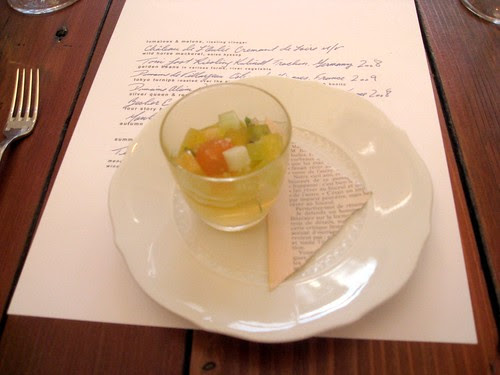 This was followed by Wild Horse Mackerel with Anise Hyssop. No fish farm is known as “Wild Horse,” although it seems as plausible as “Dirty Girl Produce” or “Wild Crane Springs Ranch” or “Riverdog Farms,” all purveyors to Saison. Here wild is an adjective to indicate that the Horse Mackerel (known to sushi fans as aji) was not farmed. The fish is very popular in Japan and deservedly so. While there was not a strong anise flavor, the presentations of mackerel, meaty and sculptural were supremely pleasing. 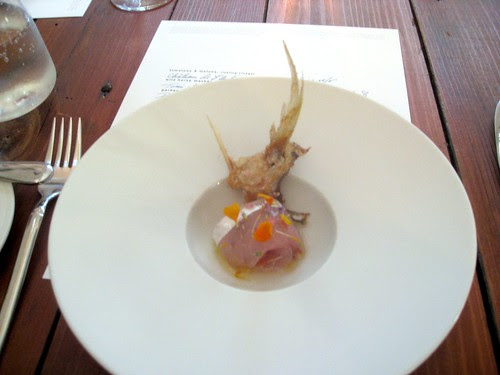 The third dish was Garden Beans in Various Forms with River Vegetable (a plant found at the edge of streambeds). Again, Chef Skenes revealed a sure green touch. The combination of legume and leaf matched symphonically, demonstrating again that vegetarians (though not vegans) may be the leading force of contemporary cuisine. 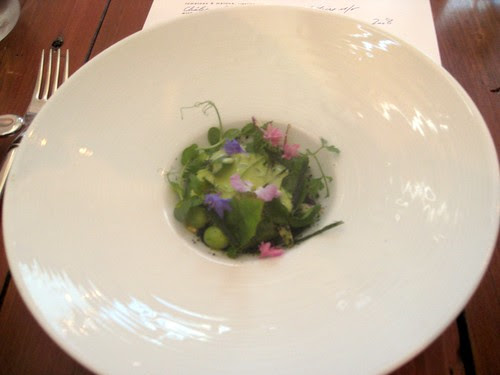 Tokyo Turnips Roasted over the Embers, Shaved Raw and Poached with Bonito, was the high point of the night. Texture took precedence although the smoky, burnt edges certainly did their part. While this was not quite a vegetarian dish, like so many dishes it was blissfully vegocentric: edging toward a religious marriage of earth and fire. 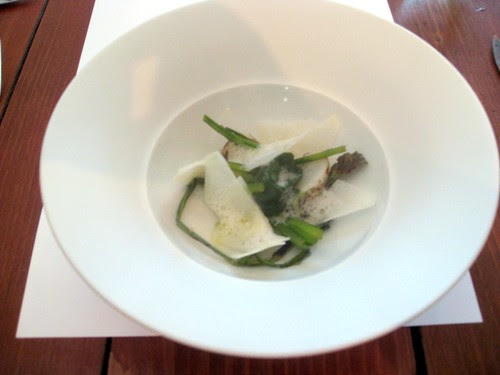 Surely the most courageous dish of the night was the presentation of Silver Queen and Red Flint Okra with Wild Seaweeds and Sweetfish. Okra is the vegetable that it is fashionable to hate, understandable when boiled and turned into mucilage. These okras were less so, but you while you can remove okra from the slime, it is harder to remove slime from the okra. I admired the moment – didn’t hate it – but my admiration was for a brave chef, rather than a lusty dish. The mixture revealed a serious commitment to modern cuisine with its accompaniments. Still better okra is not as delicious a good anything-else. 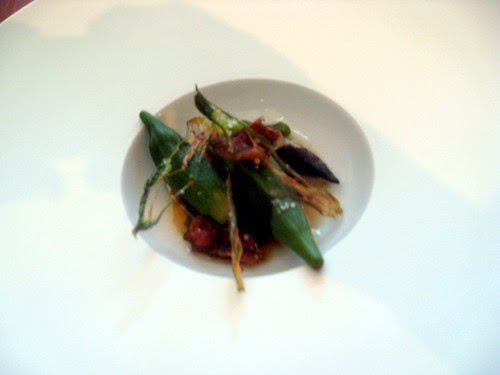 The marquee protein was a composition of Four Story Hills Squab, roasted in Fig Leaf, Adriatic Figs, Cave Mascarpone, and Rosebud (Four Story Hills is a farm, not a squab varietal). It was beautiful and lush – squab presented several textured ways with a rich combination of fig and cheese. Perhaps it was not the beef that Saison’s fireplace might produce, but in its gamey way it was glorious. Desserts were less elaborate, although suitable to the end of an evening. At Saison it is the vegetables, not the sugars, that matter. The first selection was Autumn Flame Peaches (a variety), ember roasted and peach sorbet with milk granite. The powdered milk didn’t do much for me, but the roasted peaches were a wonderful tribute to September. 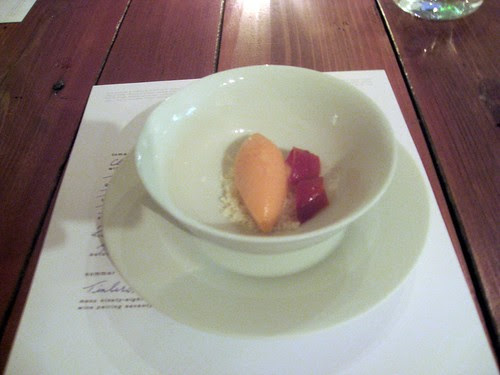 Finally Summer Berries in their Consommé with Yuzu Ice Cream was a perfectly appropriate close to dinner. If not startling, the berries were juicy and well-matched. 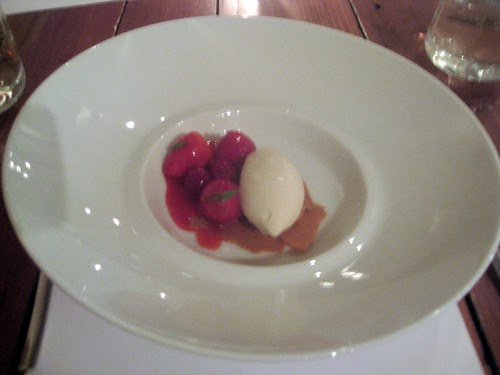 I was delighted by Saison’s seasonal cuisine and its eight course tasting menu ($98; Saison also has a kitchen table where longer progressions can be served). Here was a restaurant that deserves a place on any weekly rotation. The vegetable dishes were superb, the squab was a fully conceived dish, and the techniques gaze forward as they look far back. While not the most deluxe restaurant in the Bay Area, Saison holds its own any month.