The Jumbo Kingdom Floating Restaurant off Hong Kong Island, near the Aberdeen Fishing Village (more like a very large and diverse marina) is a sight to be seen. It is a huge Hong Kong dim-summary: a gathering for parties, banquets, and tour lunches, although not a place to eat more than serviceable dim sum, less impressive than good (not great) establishments in New York, San Francisco, or even Chicago.

I spent much of my first day in Hong Kong on a Gray Line tour to gain a sense of the city, and the Jumbo was where they parked us for lunch. The dim sum selections, understandably, if sadly, were from the dark edge of the menu: a dry Steamed Barbequed Pork Bun, a greasy shrimp egg roll, bland curry noodles, and a flavor-challenged shrimp dumpling. The only two passable dishes were those that I ordered personally, a sweet Chinese Ginger Juice Pudding although with only a whiff of ginger, and a crispy fried sesame beef ball dumpling. The greatest compliment that such a meal can receive is: filling. 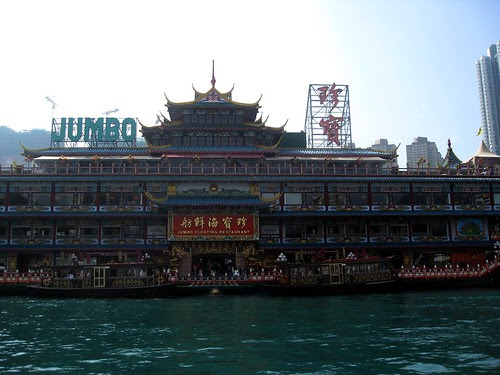 Things improved in that evening when my host – a Hong Kong native – selected a Shanghai restaurant, the Tsimshatsui branch of a chain, Shanghai Xiao Nan Guo Cuisine. The ambiance was clean and pleasant, muted, although somewhat generic, more what one describe as international style than distinctly Chinese (if Hong Kong can, in fact, be considered distinctly Chinese).

The first surprise came at the start of the meal when water arrived (Jetlagged, I didn’t care for tea). The water was served hot, which my friend informed me is considered healthful in China. The second liquid surprise was the Chinese rice wine – rather like a sweet, dark sherry, also served warm (like sake). When a dried sour plum was added the wine gained a distinctive and pleasant musky fruit aspect.

Even though there were only two of us, we ordered enough for a platoon: Asian trenchermen. The meal began with pungent marinated duck tongues. The enjoyment of the meat (and the very idea of the dish – no worse, surely, than foie gras) was moderated by the difficulty of consumption, nibbling the edges of cartilage while mismanaging chopsticks when half asleep: getting the tongue in my maw was easy, in removing less picturesque. 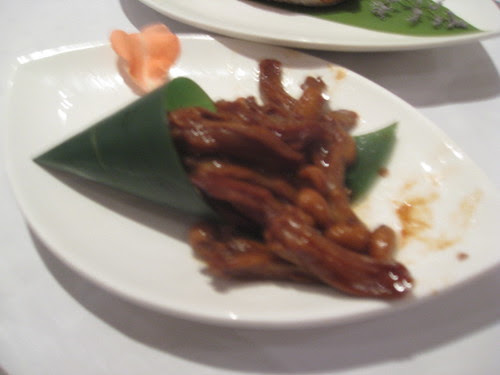 The tongues were soon followed by a pair of lightly fried crispy yellow fish – a small white fish with a yellow tail (not tuna-type yellowtail), the size of a large herring. It was beautifully fresh, airy, and crackly in all of the ways that fried food reveals its perfection. 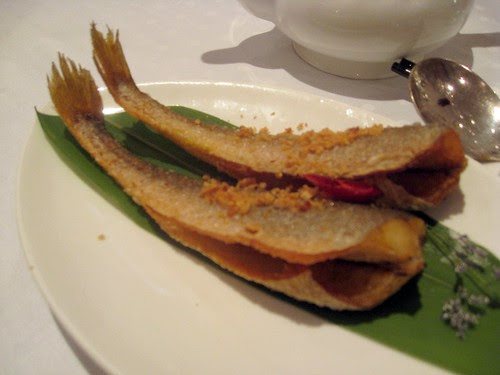 Steamed pork dumplings are a well-known Shanghai speciality, and these bocce balls, with soup hidden inside were sturdy if not startling examples of the genre. Less special – and heavy – was sticky rice with pork rib. I am confident that this dish is no worse that how the dish was intended, but it lacked a special appeal. 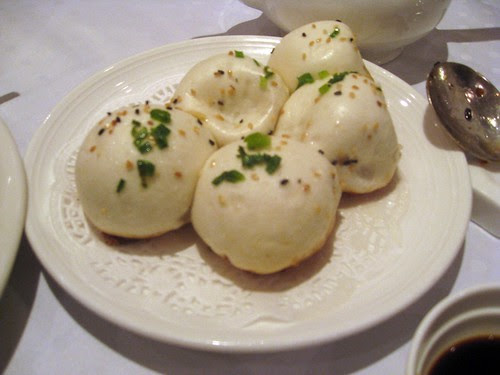 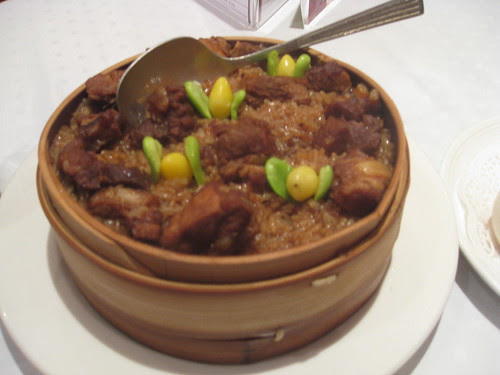 For me – and my companion – the high point of the night was Fish Maw with Crab Yolk, advertising the Shanghai expertise with seafood. Astonishingly this dish was both eggy and slightly sour, a citrus note that cut through what could have been the unctuous quality of the loose egg sauce. Its revelatory golden color added to its appeal, as did the delightful fish maw and sweet crab. This plate was both inspired and awakening. 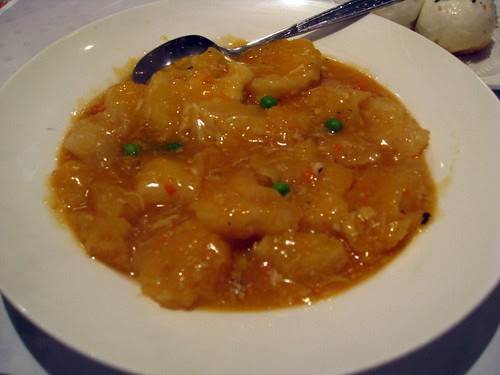 We ended the evening with two sweet soups. First, was a light and fresh Papaya in Broth: a wake-me-up that would served as a palate cleanser had it not been warm. The final soup was a sugary rice wine soup with gelatinous rice balls. Had it remained with these ingredients, it would have been too heavy for a final note to this long symphony. Fortunately, in the liquid were some dried flowers which transformed this dessert into an incredibly fragrant memory – enough to recharge us into the warm January Hong Kong night on our way to the elegant Felix bar at the Peninsula. 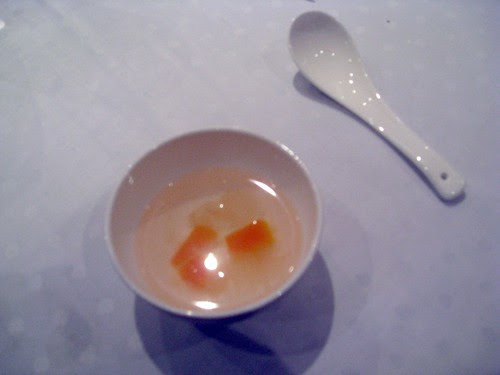 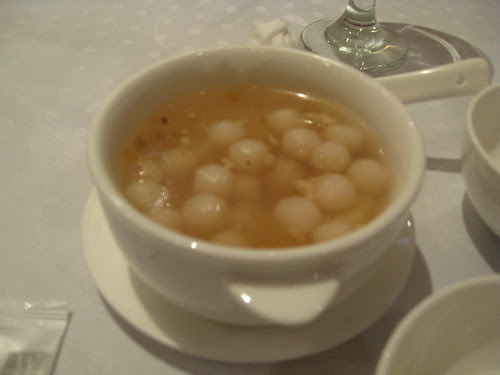 By some accounts Lung King Heen, the three-star Michelin restaurant on the fourth floor of the Four Seasons Hotel in Hong Kong with its stunning view of the harbor, may the best Chinese restaurant in the world. Certainly no other Chinese restaurant has received such Michelin praise. When I visited Hong Kong last month, Lung King Heen was on my agenda. I had read about the strengths of the restaurant and was fortunate to rely upon the experience of “Ultimate Epicure,” and so did not choose blindly from the extensive menu, although I also relied on the guidance of my savvy server.

There is much to commend the food. But what I remember most clearly relates to the fact that I was dining alone. When I sat down, I was provided reading material for the time between courses: Travel and Leisure and Christophorous Magazine, a magazine designed for Porsche owners, perhaps LKH’s market niche. Should I have been grateful (or disappointed) that I was not given the Guangzhou edition of Maxim? Different stokes, as they say.

Cantonese cuisine used to be China’s culinary ambassador to the global maw, but today the style is seen less as exotic, but as fusty. However, Lung King Heen demonstrates that such a patronizing perspective is not essential. With its lengthy menu of well over 100 items, the kitchen is both skilled and flexible. I have had others Chinese dishes whose taste adheres to memory, but few that make such a claim to sheer opulence. The meal was superior, and yet surprise sometimes bowed to technique.

The innovative chef amazes from the first bite: the amuse astonishes. This was not the case at Lung King Heen, where my first bite was the saddest. I begin with a tiny plate of crispy squid, tomato, and cucumber. The squid, heavily breaded was anything but crispy, and rather tough. What was I doing here? Were the Michelin inspectors asleep? 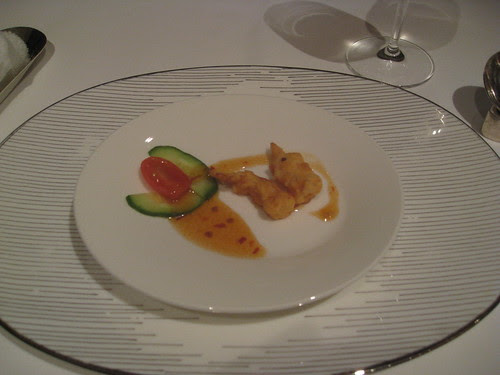 My appetizer selection was imperfect, but more satisfying. I received a trifecta of roast goose with plum sauce, BBQ pork with honey, and BBQ suckling pig. The technique impressed me, but the small dishes varied in their pleasure. The goose was somewhat tough and the sauce was too cloying for pleasure. The pork was impressively sumptuous, but perhaps overly fatty. In contrast, the pig with a square of crackly skin atop was a memorable travel into the heart of pork with skin as crisp as crème brulee. 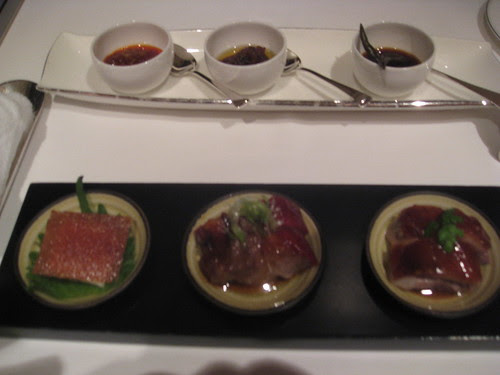 Shark fin soup is not likely to be available much longer. One bends one’s knee to animal rights. I received a wallop of criticism from friends who don’t blink at eating eyeball tacos or blanch at foie gras. Still diners wish for a full life, if that can’t be said of the object of their appetite. I selected a $100 US soup: Braised Superior Shark Fin Supreme Broth with Lobster and Gold Leaf. Here is conspicuous consumption that Thorstein Veblen would appreciate. The taste of this soup is not overwhelming, but the aroma and the texture is powerful. Perhaps I will never again choose shark fin, but this experience will last. The dish was a concatenation of subtleties, and in this revealed the artistry of Cantonese cuisine. The chicken broth was a divine gift. The shark fin amazed, slightly chewy and slightly slippery: translucent but solid. The small amount of lobster was a fair partner for the broth. The gold, not strictly necessary, reminded me that this was to be the only C-note soup I would ever order. 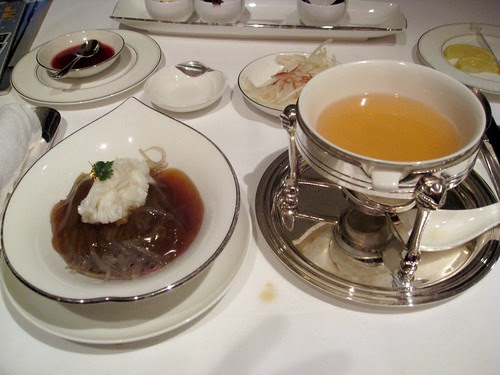 I followed this extravagance with a plate of wok-fried prawns with dried chili and shallots. Unexpectedly the chilies were not Sichuan-hot, but intensely flavorful. During my travels in southern China, I was served only a handful of dishes that reminded me of the “spicy-oily” dishes so common in American Chinese restaurants. At Lung King Heen the heat never overpowered the ingredients, with shallots and cilantro providing a depth of flavor. Not a novel combination, the dish was intensely satisfying. 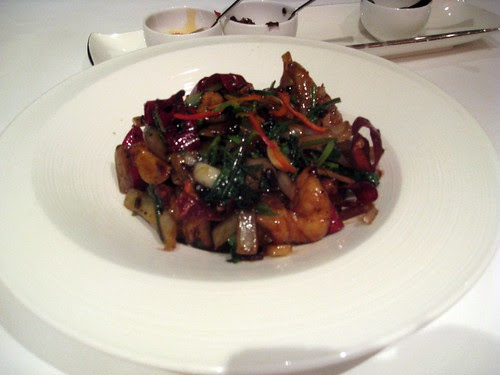 I completed my entrees with a luscious dish that I surely would not have selected had it not been for Ulterior Epicure’s advice: braised e-fu noodles with fresh Alaskan crab meat in Champagne sauce. East meets west. The sauce was as rich as any pasta sauce I can image: a roll in butter and bubbles. Crab, tender and sweet. The sauce had a French consistency, and the noodles a Chinese bite. E-fu power was the echo of luxe. For a moment I became a titan of industry passing between two worlds. 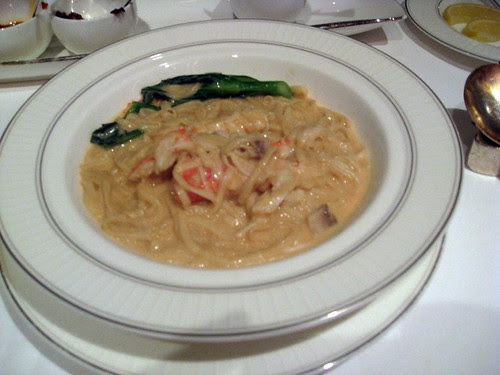 What Cantonese banquet would be complete without a Bird’s Nest? Rather than selecting a savory bird’s nest course, I chose dessert: double-boiled egg white milk custard with bird’s nest. The flavors were never overpowering, but the textural subtly matched the flavor notes with hints of ginger. The dessert was so remarkably smooth and so light that it might have been avian. 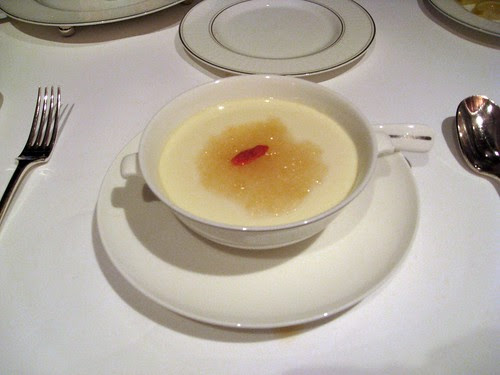 In all, I felt well-satisfied with Lung King Heen, even if I recognized the many leagues between the Four Seasons experience and the traditional Cantonese table. Still, when in Hong Kong, one might as well pretend to be Governor General.