Is Otom a Moto, si? Otom

When a restaurant decides to divide amoeba-style, diners must divine whether the new boîte is a clone, a sib, a spouse, or a bizarro adoptee. What is the relationship between the two? In some cases, Vong or L’Atelier du Robuchon come to mind, restaurants attempt to replicate themselves. In others, such as The French Laundry or Per Se, the genetic code is similar although not identical. In still others - Everest and Ambria, say - the restaurants are distinctive, although similar rules apply through common direction. And then there is Moto/Otom.

How could owner Joseph De Vito, the guiding light behind team Moto, expand? The Moto niche market, while sufficiently enthusiastic, will not appeal to all those nighthawks who fly at twilight through the West Loop. The decision is close to brilliant. De Vito and his chef Daryl Nash (formerly sous chef at Moto) embraced the Moto style, down-marketed it slightly and serves food that tweaks comfort. It is an ingenious strategy, building the Moto brand, while not cannibalizing it (and there is talk about a future dessert bar (a la New York’s Room 4 Dessert: oomt?).

Recently seven faithful members of the LTH board (led by Happy Stomach) paid a visit to Otom to sample much of their menu. The evening was a notable success, even if Chef Nash still must figure out precisely how distinctive and disorienting he wishes his plates to be. Several of the dishes were excellent and proficient (particularly the main course meats), some were good but lacked the stuff of memory, and a few were disappointments. In general, those dishes that worked best were those that incorporated dollops of savory creativity. Otom is still in its three-month shake-down cruise and if the best dishes currently available are coupled with new creations, Otom will be very fine indeed. The spatial layout of the room was somewhat unusual. Our table (perhaps located where it was because of our visit) was at the front of the long room with the middle given over to the bar area and then at the back were placed most of the tables. Possibly were we not present the large front of Otom would be used for the bar crowd. From the list of cocktails, it seemed that the cocktails had much of the creativity of Moto.

Before describing the dishes, the bread at Otom is notable. (Moto does not serve bread, but at Otom we are in the world of happy carbs). The best of the three breads was the slightly sweet pumpernickel, which, when slathered with honey butter was divine.

The service for our group was a combination of French and Russian service. Six courses (two appetizer courses, two main courses, and two desserts) were served with several plates in each course.

The first set of appetizers were a trio of salads: 1) House-smoked turkey cobb salad with bibb lettuce, crispy Pancetta, blue cheese, hard-cooked egg, avocado and grain mustard vinaigrette (no photo), 2) wilted spinach salad with golden beets, smoked oyster mushrooms, red pepper and roasted garlic vinaigrette, and 3) marinated bean salad with red onion, oregano, rice noodles, and caramelized shallot vinaigrette. These salads are ordered in their distinctiveness and in their culinary interest. The cobb salad was a creditable rendition, but with little special appeal. I liked the inclusion of beets and mushrooms in the wilted spinach salad. Perhaps the beets and oyster mushrooms or peppers could have been more dominant, but it was an impressive creation. Most memorable was the bean salad which traded on the crispy rice noodles and oregano. Of the six appetizers, this bean salad was the one that I long to taste again, as much because of the creative texture as a dramatic taste profile. 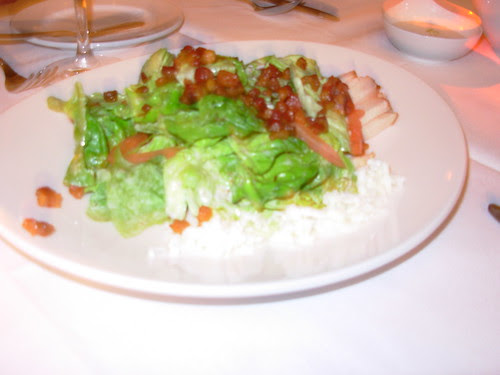 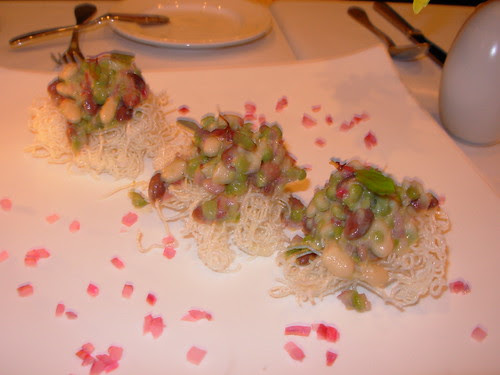 The salads were followed by a trio of more substantial appetizers, 1) beer-battered vegetables with caramelized onions and sherry vinegar aioli (no photo), 2) a set of miniature burgers with bacon and cheddar, mushroom and Swiss cheese, and with a fried quail egg, served with an order of shoestring potatoes, and 3) Chinook salmon ceviche with lime, chili, cucumber and wonton chips. I admired both the vinegar aioli and the creditably crispy shoestring potatoes, but neither the heavily battered vegetables nor the thin, runty, and somewhat overdone sliders were particularly memorable. Although the wonton chips were not wanton in my recall, I admired the firm cubes of salmon in their distinctive marinate. The ceviche could have been served with a thinner cracker that would have brought out the luxurious and bracing taste of chill raw fish. 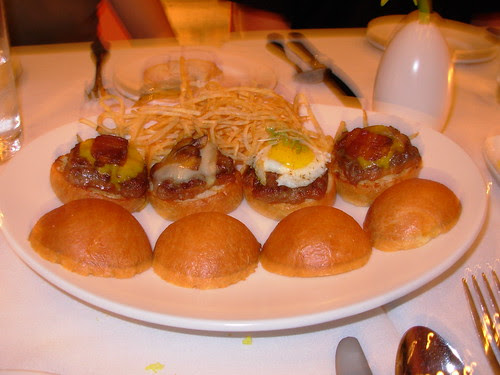 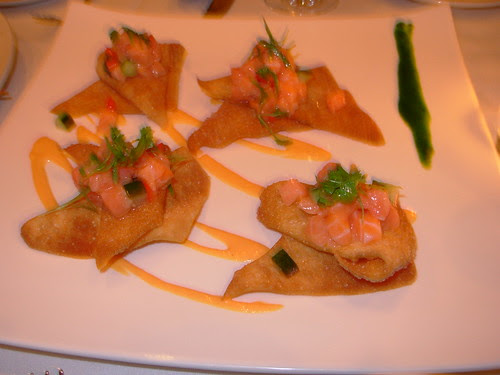 Chef Nash was on stronger ground with his meat dishes: these revealed his abilities to transform comfort food into memories, and were the cuisine for which Otom should strive: not Moto upendings of expectations, but energetic challenges to the tried and true. Our first quartet consisted of: 1) macaroni and cheese with creamy rosemary-white cheddar sauce, smoked carrots, and parmesan-panko crust (no photo), 2) roasted acorn squash and oyster mushrooms with seared tofu and crispy shallots, 3) braised beef pot pie with roasted root vegetables, veal demi-glace and puff pastry, and 4) house-smoked apricot and chili glazed pork back ribs with crisp sherry slaw and pickles. The pork ribs were a real triumph, as Chef Nash transformed a rather traditional dish to one with special resonance. Perhaps the slaw could have used more sherry, but the dish was heroic. The pot pie was an admirable rendition of the classic comfort food. Perhaps it might have incorporated a few twists and turns, but it was nicely prepared. The squash and tofu was deserving of praise, but it is difficult to treat tofu as the sensory center of a plate. Tofu does not – for me – lend itself to memory. The mac ‘n’ cheese was fine, but less evocative than the description. The sauce could have used a few more jolts of rosemary to deserve a poetic account. 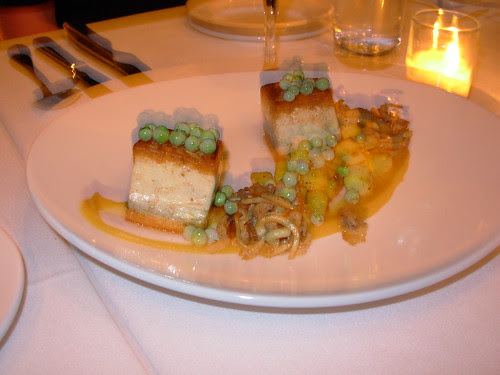 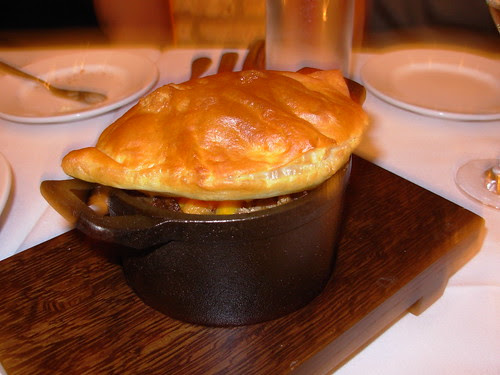 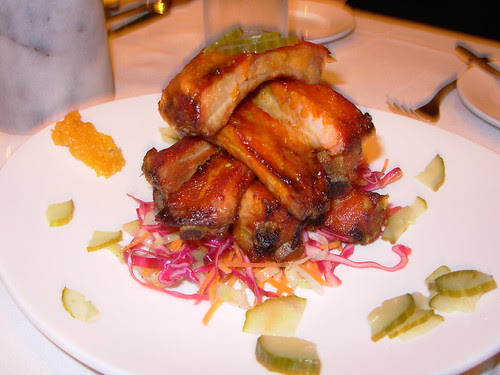 The second quartet included: 1) grilled top sirloin with butter-poached new potatoes, golden onion rings, and veal reduction, 2) grilled swordfish and jicama-Anaheim relish with gooseberry soup, 3) beef short rib ravioli with shallot and sage goat cheese, candied sweet potato and brown butter, and 4) raised lamb shank, white bean cassoulet, rutabaga, and olive oil. The weakest dish of the night was surely the overcooked fish. But the trouble went beyond the cooking; often the dishes on the menu read better than they taste – the promised snappy and distinctive accompaniments, such as the gooseberry soup, are more muted than one might imagine. What promises to make a dish stand out is no more than a back taste; the soup could have had more zing. I encourage Chef Nash to be less afraid of the power of taste, less subtle in his cuisine. In contrast to the fish, the short rib ravioli was the strongest dish of the night. Here the goat cheese, beef, and sweet potato blended in symphonic fashion. It was a superb dish. The lamb shank was also a fine dish, well worth ordering, although perhaps a more generous drizzle of olive oil would have made the dish stand out further. 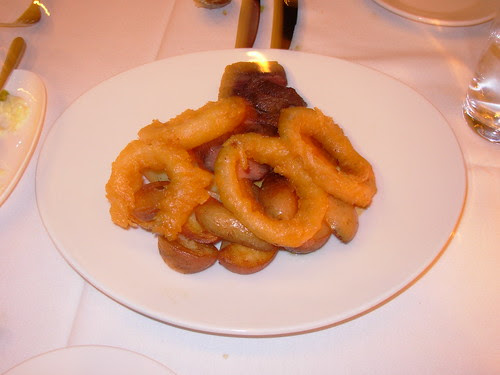 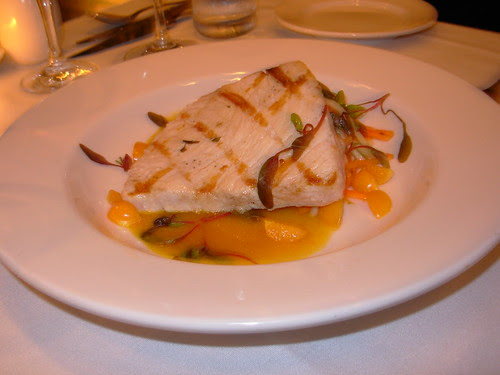 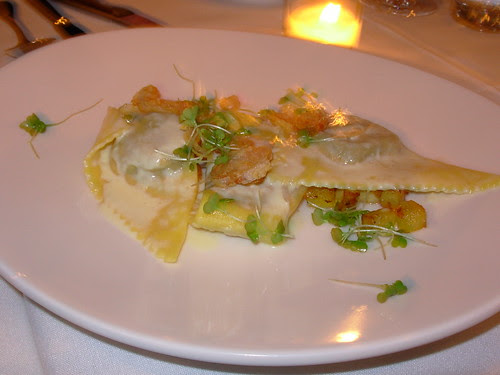 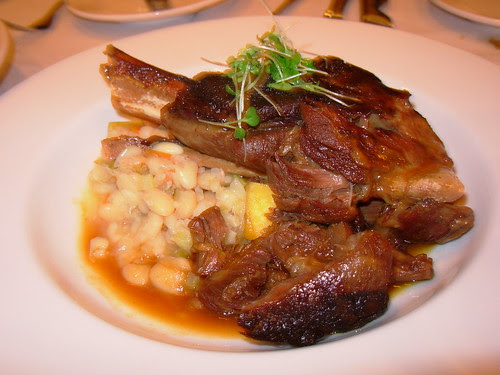 I have recently had a problem with desserts. Many pastries cannot meet the standards of the rest of the meal, just as many restaurants (although not Otom) find it hard to insure that the main courses equal the appetizers. We were served 1) apple crisp, topped with house-made vanilla ice cream, 2) strawberry shortcake with crème fraiche and mint syrup (no photo), 3) banana split pops with caramel, roast pineapple, and maraschino cherry, and 4) homemade brownie with home made marshmallow. Of this quartet, the brownie, although simple, stood out, mostly through the virtues of the honest, rough-cut marshmallows. The shortcake was rather dense for my taste, and the apple crisp was too salty. The suckers were easy to love, although not particularly complex in their creation. 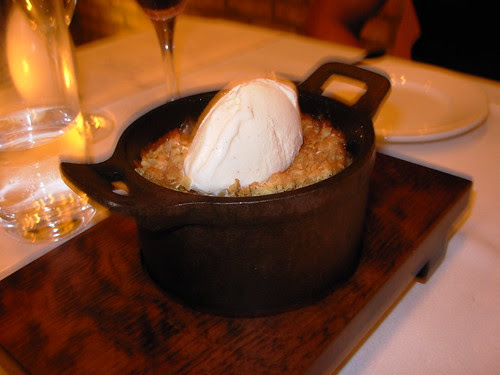 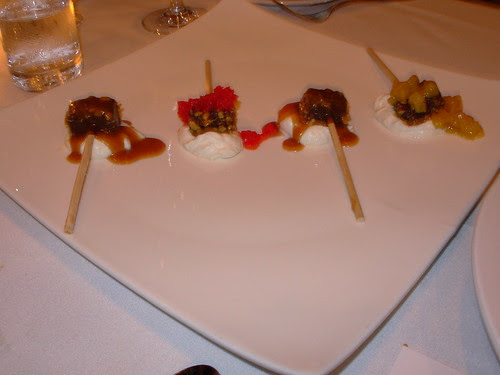 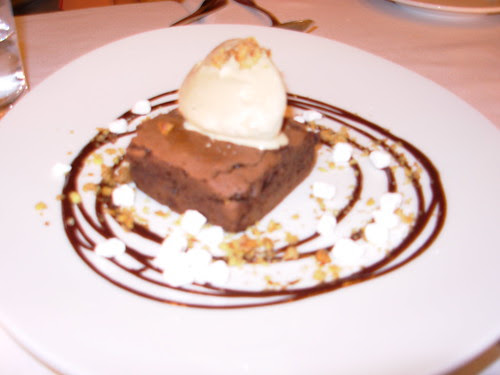 From the accounts of the restaurant, it is not certain how much input Chef Cantu has in its vision and its cuisine. Still, Otom stands on its own. It is a restaurant in process: a restaurant that needs to decide the extent to which its cuisine is designed to jolt the diner or blanket her in nostalgic comfort. For Otom to become a destination restaurant for its cuisine the former must be emphasized as with the bean salad and short rib ravioli, and this does appear to be the goal. Otherwise, Otom is in danger of serving 1970 food in a 2010 space.

Not all of the photos are up to standard, sorry.