Joia to the World – Joia – Milan

Although the betting line on Italy asserts that one cannot get a bad meal, my month-long visit proved – some nights – to disprove that culinary bromide. But forget those forgettable nights. This memory is a glorious – and surprising – meal, a lunch actually, in Milan (my most treasured meals were invariably lunches; dinners matter less).

I was nearly at the end of my stay without a truly astonishing meal. It was almost chance that I stumbled upon Joia, the lovely restaurant of Chef Pietro Leeman, a Swiss chef, trained by Freddy Girardet in Crissier at his Restaurant de l'Hôtel de Ville, according to some the world’s best restaurant in the 1980s (my meal, under Chef Girardet’s successor Philippe Rochat, was certainly world class). Chef Leeman has been cooking in Milan since 1989, and while one can see some echoes of Crissier, there are also dashes of Michel Bras, Hester Blumenthal, and Alice Waters in his cuisine: unfussy, playful, and seasonal, a half-step from vegetarian (with a few fish choices). Chef Leeman defines his style as “Alta Cucina Naturelle,” but this does not quite do him justice, ignoring his desire to subvert the relationship between the diner and chef, more characteristic of cuisine agape, a cuisine of amazement. In our postprandial conversation, Chef Leeman was quick to differentiate himself from molecular cuisine in his refraining from using the more experimental cooking techniques (he added foam to one memorable dish, but perhaps, foam is the new butter). His dishes aim for poetry more than science, as evidenced in the brio with which each dish is named: “A Stone Rolls,” “Virtue,” “Moving With Deliberation,” and “Blub”). Diners may find these zenish labels charming or pretentious, as they will. Several dishes are interactive, and perhaps a little too jesting in spirit. Chef Leeman does more than cook, he thinks and feels.

For my luncheon I ordered the five course spring tasting menu (all vegetarian). I began with an amuse: a shot glass filled with a soupy parfait: lime, puree of flageolet beans, and balsamic gelee. This was everything that an amuse could be: cool, awakening, filled with surprise, and a showcase for the chef’s talents to come. Although no one would describe Joia as an “Italian restaurant,” the use of the wondrous balsamic gelee serves to indicate that Chef Leeman can work marvels with Italian ingredients. The mix of lime, beans, and vinegar might seem preposterous, but the solidity of the beans served to bind the lime and the vinegar. A great start. 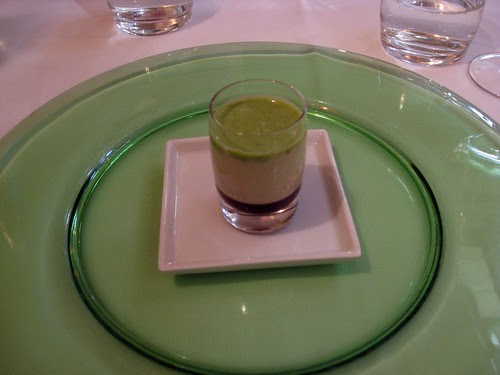 The first appetizer, “Contact and Consent,” was perhaps too precious in conception. I was presented with two small trays with three objects each: the left tray was designed for touching, while one ate the parallel ingredient on the right. On the left was a small glass filled with ice studded with flower petals, a sprig of rosemary, and a stone: Haiku Cuisine. Facing these were, in turn, snow pea and tomato soup, a zucchini flower stuffed with pea puree with a dab of mustard and dill, and asparagus on a fried chickpea square. I loved the sweet and simple soup with its swirls of red and green, and the well-made zucchini flower, alternatively pungent and smooth. I confess to feeling a bit foolish touching the stone, an exercise that had some of the excess of wearing earphones to hear the ocean at the Fat Duck. Tastes, not contraptions, are their own reward. 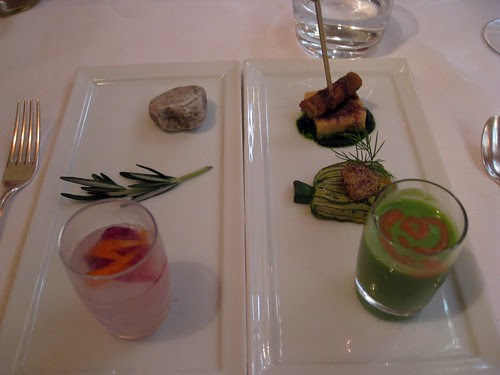 “First to the Left, then to the Right” was another interactive dish. The chef provides three small glasses: cream of zucchini, puree of Tropea onion (allegedly a Calabrian aphrodisiac, as if Italy itself were not Viagra), and a yogurt and horseradish curry. First the instructions, then the dish. Consume half of the cream soup, add the puree, finish half of this mixture, then add the curry, and finish. Gustatory miscreant that I am, I tasted each vessel before mixing and matching, but eventually fell into line. The outcome was quite satisfactory, although I could easily have had a bowl of the cream of zucchini or the zucchini/onion mix. The chef might have simply prepared three bowls as he wished, rather than demand his non-union clients collaborate, but it was a treat to see how his flavors spiral, reaching a crescendo. 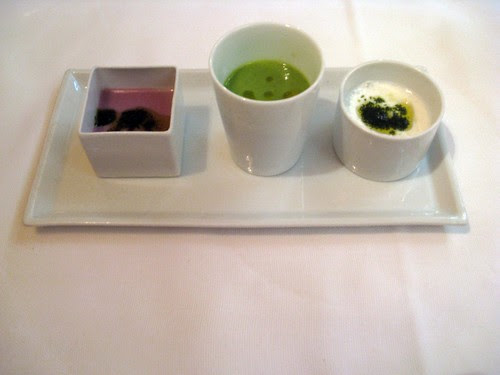 What might a dish “In Praise of Tradition” mean at a vegetarian restaurant? The dish, meatless, was robust without attempting to recreate meat. Chef Leeman served bread dumplings, roasted chestnut, and carrots with snowpeas and Castelmagno cheese (a semi-hard, Piedmont cow’s cheese). The dish was impressive, capturing the stewed features of tradition, while still being airy and sprightly, and very much the chef’s creation. It appeared hearty – and was – while not dismissing the bearable lightness of a naturelle cuisine. 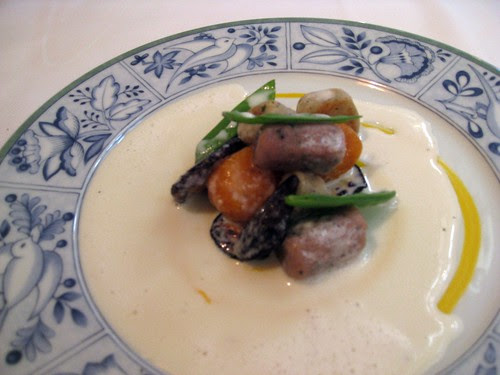 The final main course, “Beneath a Colorful Carpet,” included a lovely array of morels, asparagus, smoked ricotta, lightly spiced zucchini, and arugula pesto. This mixture was napped by a foam of saffron and (separately) raspberry. I was afraid that this would be a jarring excess (and I might have replaced the raspberry with mint – although the berries were well-modulated), but this dish was astonishing and so spring-like, one might have imagined one was in the woods, rather than in traffic-choked Milan. Unfurling vegetables so gloriously revealed the power of a meatless mind in the kitchen. 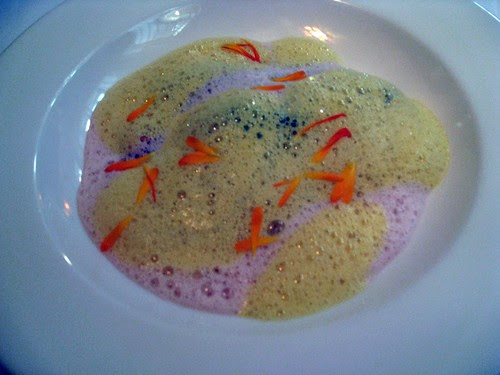 My dessert was known as “Ah.” Oh. And it was something of a gibe, referencing more classic presentations. The dish arrived under glass with smoldering incense, shades of Grant Achatz’s odorous cuisine, giving the plate a smoky aspect. Chef Leeman prepared Cream Catalan with cherries, bolstered by a scoop of lush pineapple ice cream and a cup of passion fruit juice, the plate dotted with saffron and cherry sauce, reprising the saffron/raspberry foam of the previous course. As in a symphonic production notes reappear in new forms. This was a compelling plating of cream and fruits, with the springy twist of late memories of an incense and intense evening. Here was fruit salad, reimagined. 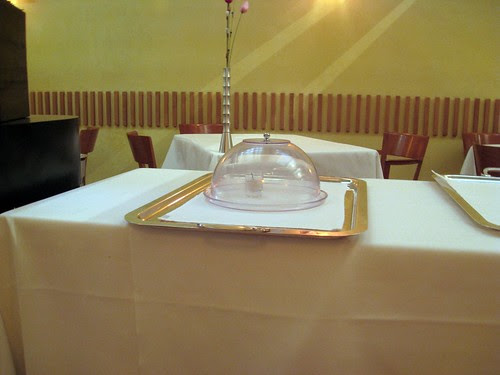 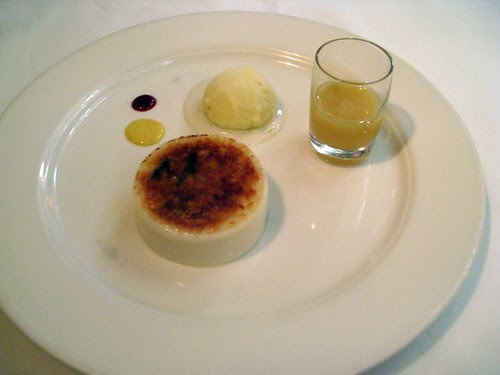 What is the inverse of an amuse? A lagniappe, perhaps. A reprise of the fruit juice: pineapple with notes of raspberry and ginger. The small glass was sheathed with a soft wafer of banana and chocolate that obligingly slid into the drink. As Chef Leeman’s entrees pay tribute to vegetables, his desserts are paeans to fruit. 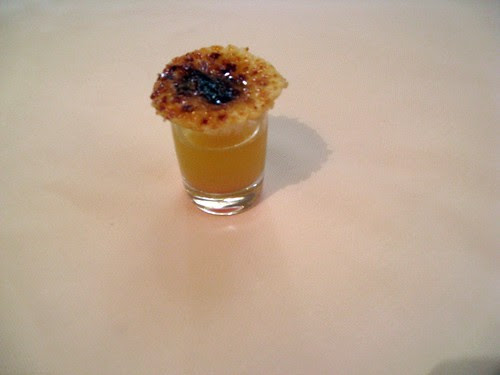 Joia is a splendid, startling, provoking restaurant. Its small, elegant, but somewhat humble, space separates it from a palace of haute cuisine. And the Chef’s desire to provoke may cause some second thoughts. But measured bite-by-bite, eating at Joia is an astonishing afternoon. This midday I selected the abbreviated menu, but next time I will ask for the Chef’s finest hours. I am sure that he will – comically, mystically, poetically - oblige.

Vie is for Volume – Vie

There is a thin sounding board – a line in the decibel sand – between excitement and exasperation. Restaurants as organizations appeal to their market niche not just in cuisine and cost, but in clamor and clatter. And the politics of noise can be the undoing – or the doing – of sterling restaurants.

Last Saturday, frightened by the ongoing repairs on the Edens Expressway, feeling cut off from the Chicago dining hub, my wife and I headed west: to Western Springs and Vie, a restaurant that I had once visited on a calm – nearly empty – Tuesday night. Arriving Saturday night at 9:00 p.m. we were escorted into a jangling, buzzy dining space (Vie has a warren of small spaces, not well soundproofed). Despite polished service and Chef Paul Virant’s impressive and confident locavore, seasonal cuisine, what was most memorable about the first half of the meal was the roar of conversation: and this in a restaurant where the tables are not snugly packed and the diners are not screaming sweet nothings. While the core of a review should properly be what is on the plate, it was sound that was on the mind. If Vie hopes to compete with the Chicago luxe restaurants and not to be a glorious bar-and-grill, Chef Virant needs to call his decorator. He gets an earful from this diner.

Given that this review lacks a sound track, I turn to the Chef’s doing. At most restaurants the appetizers are the star: the meal goes downhill from the start. This is not true at Vie: our entrees stole the show. True, my wife ordered a salad (Local Lettuces, Marinated and Shaved Fresh Hearts of Palm, Garlic and Herb Vinaigrette, Parmigiano-Reggiano), and, true, she enjoyed it exceptionally. For me it was a nicely done play on a Caesar-type salad, impressive within the genre. 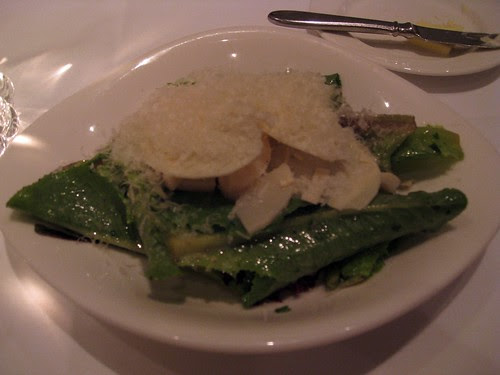 My appetizer was Wood-Grilled Gunthorp Farm Duck Breast, Cracklings, Arugula, Black Raspberry Aigre-Doux, and Tatsoi (a type of bok choi; Vie helpfully places a glossary on their menu). The combination was very nice indeed, although I found the duck undercooked (mostly a problem of texture). With duck cooked more to my liking, this would have been a superior dish, especially because of the remaining textures and the pungency of the flavors. 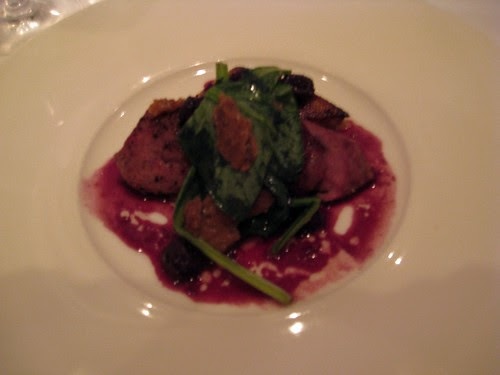 As a main course my carnivore partner selected Marinated and Wood-Grilled Painted Hills Strip Steak (provenance is vital at locavore haunts), Baked Wisconsin Cheddar Toast, Local Asparagus, and Creamed Spence Farm Ramps (no other farm will suffice!). As with my appetizer, the meaty center of the meal was enlivened by a set of pungent companions. The dish didn’t need Worcester to have zip and zing. The beef flavor and texture did not dominate but was nicely matched. 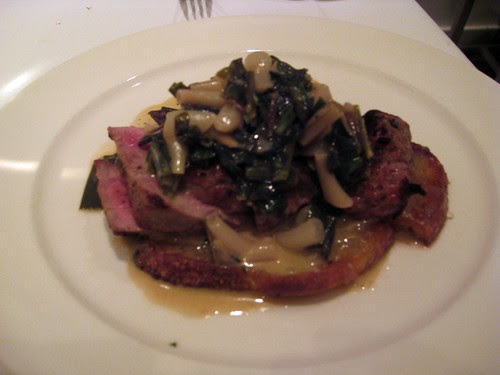 My entrée was splendid. Throughout this mid-May menu Chef Virant teased the diner with seasonal morels in various guises. And I finally gave in to morels, baked crepes, goats milk ricotta (I believe), green garlic vinaigrette, and local Bordeaux spinach. The dish was a triumph. The morels were perfectly tender (and well-cleaned) and the garlic and crepes matched them bite for bite. Chef Virant is as expert a vegetarian as is Chef Trotter (whose vegetarian menu often surpassed his open menu: even with foie gras!). This was the dish that I will treasure: Vie is for Virtuosity. 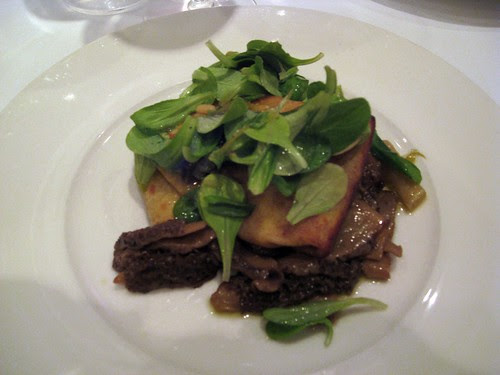 Desserts were both successful. Baba Au Rhum is difficult to destroy, but Vie’s version – Baba Au Whisky, Dooley’s Toffee Liqueur Ice Cream, Candied Walnuts, and Caramel Sauce – is very lush. Without the whisky, it might have been too sweet, but the alcohol keeps the sugar at bay. The warm Caramel Gooey Butter Cake, Almond Chocolate Chip Ice Cream, Almond Lace Cookie, and Almond Toffee Square was also sweetly striking. Although I am not a fan of “gooey” as a gourmet adjective, this cake was gooey. The toffee square was more chewy than I prefer. It was more taffy than toffee, but well-made. 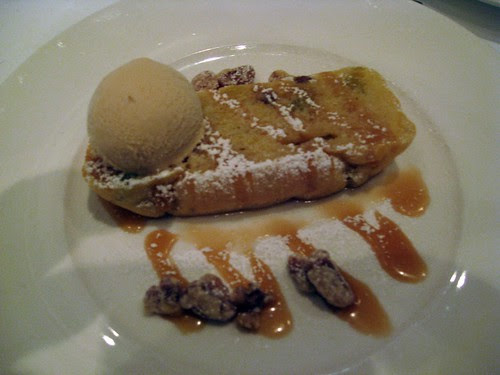 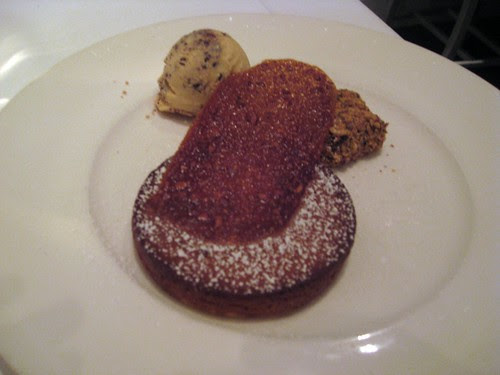 Vie consistently turns out impressive cuisine. While not aiming for a pastoral environment, Chef Virant has made Vie into a destination, not only when the Illinois Department of Transportation directs traffic his way.