Dining recently at May Street Market, the West Town restaurant, recently celebrating its first anniversary, reminded me of how much I treasure restaurants. Not just the temples - the Trotter, Alinea, Le Francais, or even Frontera Grill - but those two-star templettes, that even when they occasionally stumble, provide so much pleasure at a price that permits middling diners a routine fete. And there are no shortage of these restaurants in Chicagoland, where for well under $100, a diner can indulge as a lesser-sybarite. Consider Avec, Crofton, Lula, Prairie Grass, One Sixty Blue, Spring, Magnolia Grill, Rhapsody, West Town Tavern. The list could go on and on (including Italian and Latin-inflected boîtes). These sterling establishments are hardly interchangeable, but each is serious about food and ambiance, while not performing in the four-star circus.

Within this crew is surely Chef/Owner Alexander Cheswick's May Street Market (always confused with the quite distinct nuevo-Latino May Street Café on Cermak). May Street Market sports a clean, spare space. Some find it cool, others simply cold. As a setting for cuisine it has a white box purity (the bar area is more colorful and is more visually striking). May Street is also known for their affordable wine list (they do not have a corkage fee - either select their wines or choose water). We ordered a splendid 2003 Neil Ellis Stellenbosch Cabernet blend for $38 (about twice the asking price for this South African bottle; not an inappropriate markup).

Service was cheerful, although at our corner table, the busboy and waiter found choreography difficult. We also appreciated the cheer of Chantal Randolph, May Street's Managing Partner, now in Chicago from her home in Zaire.

Much of the food was worthy of song, inspirational takes on current trends in cuisine. May Street is known for their Maytag Blue Cheesecake with Red Wine Poached Bosc Pear, Arugula, Spiced Pecans, and Bartlett Pear Sorbet. The savory cheesecake was heavy, and needed to be speared with the poached pear or sorbet. By itself, the cake didn't merit raves, although the plate itself was an elegant mix. 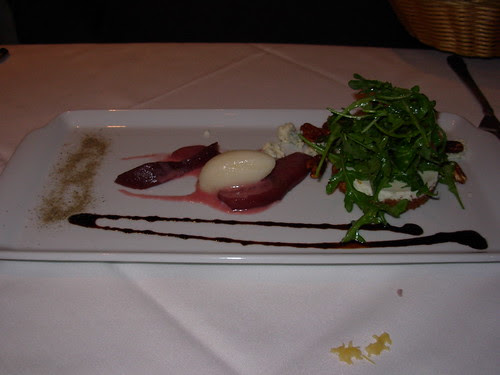 Better - and oh so amusing - was May Street's commentary on molecular cuisine. I thoroughly treasured Cheswick's Deconstructed French Onion Soup with Apple Onion Flan, Mahon Cheese, and a Pretzel Crouton. The soup was sweet and tangy, and lacked the earthy weight that often characterizes Non-deconstructed Soupe l'Oignon. Its cleverness - a twitting of the preposterous outrages of Grant Achatz - in no way marred the favored combination of apple-onion flan, Mahon cheese, and the crouton. Every bite was sublime, including each micro-green. A memorable dish. 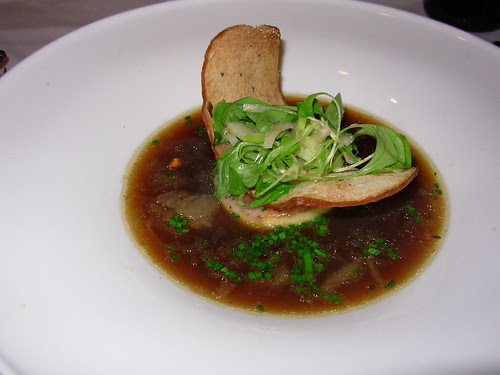 Both main courses were lush and indulgent. Of the two entrees, I give a bare edge to Stuffed Pork Tenderloin with Pancetta and Apricots, served over black beans with mustard grain jus. It was moist, fruity, and dense with pleasure, although, as with all May Street dishes (so common in our dulcet gustatory age), it leaned toward the honeyed. 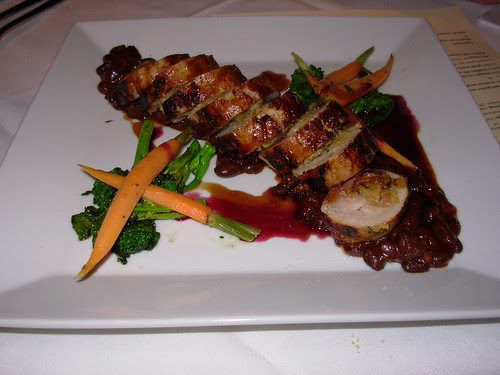 Perfectly Roasted Venison Medallions in a Pistachio Crust with Carrot Purée, Chive Spaetzle, and Lingonberry Sauce was another sterling dish of joyously juicy deer. Still, Chef Cheswick might be reminded that we have four tastes, not merely sweetbuds. This is a cook who offers no bitter love to his diners. The pistachio crust was an instance in which less would have been more. In contrast, the chive spaetzel, appearing as lime-green lima beans, was a delicate surprise. However, the best spot was a perfection of carrot purée. Was there another vegetable for which the word ethereal would have better fit? I suspect not. 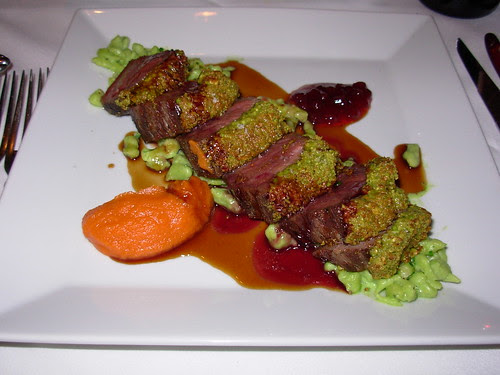 For dessert we shared Coconut Panna Cotta with Vanilla Poached Pineapple, Mango Sorbet, and a Coconut-Coriander Cake. After the splendor of the meats, this dessert faltered. Each element lacked a strong flavor. The cake, absent a powerful memory of coconut or coriander, was dry and plain. The dish appeared lovely, but the love ended at the cornea. The dessert menu reads well, but we lost the gustatory lottery this night. 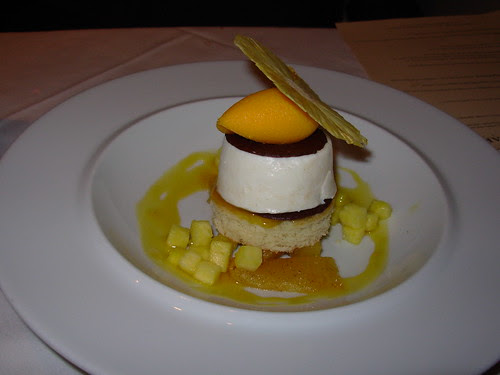 Although May Street Market claims to focus on "regional producers" (and sustainable farming practices), a menu that lists apricot, ginger, pineapple, coconut, mango, lingonberries, sea scallops, truffles, gulf shrimp, calamari, Spanish goat cheese, lemon grass, buffalo, and Dungeness crab has an oddly expansive understanding of region. If we eat global, why not think global? Yes, Maytag Blue Cheese is produced by our friends in Eye-o-Way, but for this early spring menu, a claim that ennobles the local seems a conceit.

Still, May Street Market is a welcome and smart addition to the Chicago dining scene. Perhaps it lacks a distinctive niche, but this takes nothing from its culinary charms. As far as I am concerned, Chef Cheswick can deconstruct my chowder any time he wishes.