After being prepared to admit, sadly, that there are no excellent restaurants in Cambridge, a week before my departure I had one of the outstanding meals of the year. Of course, the happy success was not a total surprise as the Midsummer House (set in a lovely garden near the banks of the River Cam) had received two Michelin stars. However, two Michelin stars have often been just enough to break one’s heart. But not this evening. Under chef Daniel Clifford the meal was nearly flawless, failing only a few minor tests.

The evening began with a tiny, but surprisingly robust gazpacho tasting, made memorable because of a wave of pureed celery that set off the acidity of the tomato base. It was delightful, and would have made a worthy bowl on a summer evening. This was followed with a simple and creative anchovy tempura – just enough fat and salt to make every health care vanish. It was unfortunate that these starters were pared with the only real failure of the evening: two cheese (brie?) gougeres that were overfilled and lacking interest.

Still working through the amuses, I was presented with a crystal ball filled with pink grapefruit cream and champagne foam. While foam is properly being edged off the gastronomic stage – having had its fifteen minutes of culinary fame – foamy champagne was a novel and witty retort. It was a memorable palate cleanser before my palete needed to be cleansed.

This was followed by still another amuse: a sweetpea veloute served with tiger shrimp. If not as creative as the remainder of the meal, it was silky smooth and the essence of an English spring. 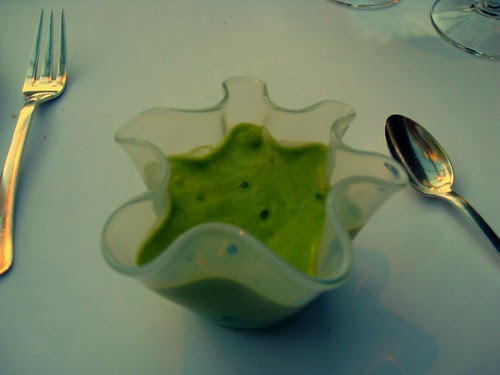 Finally we reached the meal itself, which without being experimental, captured the best and brightest of modern European cuisine. The ingredients, of which there were many, blended in inspired and startling ways, and, in fact, I was profoundly grateful that I avoided the tasting menu so that I could enjoy these plates in full.

As my appetizer, I selected maple-caramelized sweetbreads with turnip, pistachio, ox tongue (!), and maple jelly. Although such as dish had danger of being an early, cloying dessert, the sweetness was mellow and added a complexity and richness to the subtlety of the rest of the ingredients, rather than overpowering them. 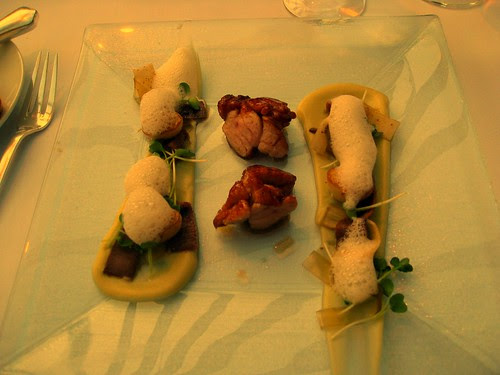 For a main course, I selected braised turbot with peanuts and pistachios (this turned out to be an all-pistachio dinner), sea scallops, cos lettuce, asparagus in a crackly pastry, and vanilla. While I would have preferred my fish to be more translucent, such is rarely how fish is served in the British Isles, and the fish was in no way overdone (even if such cooking involves dancing on a tightrope). The remainder of the plate was splendid, and complemented the mild white fish to excellent effect. Chef Clifford is particularly to be commended in his attention to texture. 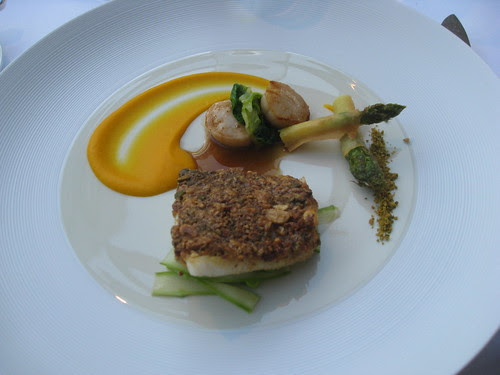 I passed on an extra dessert – a tiramisu – too much caffeine: but it was a beautiful display.

Finally a triumphant close: warm braised cherries with pistachio (again!) ice cream with a cream filled pistachio “cannelloni” shell and underneath chartreuse tagliatelle. Perhaps the meal was dominated by nutty tastes, but they were remarkably sophisticated with the herbal echoes of chartreuse as a counterpoint. 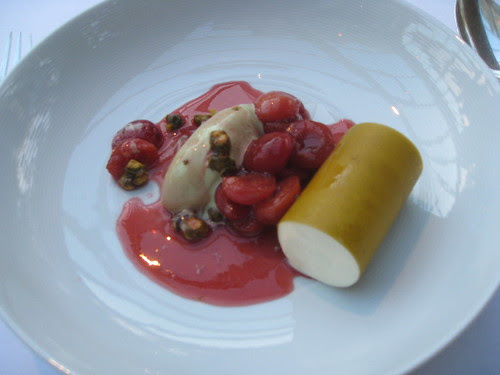 The Midsummer House deserves attention and not only in the long evenings of June. The location and size of the restaurant militates against a third Michelin star (it is not really in position to be a “destination” restaurant), but I have no hesitation in preferring it over two London standards The Square or Marcus Wareing at the Berkeley, and, if not as creative as Gordon Ramsay or The Fat Duck, capable of equaling them in pleasure and bettering them in cost.

About five years ago, the Old Edwards Inn in Highlands was renovated, transformed into a four-star (or five-star or however many stars mean really, really fancy and) inn, resort and spa. In the course of this transformation from an old-timey inn on Main Street, they opened a fine dining restaurant, Madison's. In its first iteration it attempted (somewhat bizarrely, and without much grace) to borrow from molecular cuisine and also incorporate a set of rather bizarre flavor combinations. Different is not always better. Back then the restaurant was rather too taken with itself, and my first meal was not a success - quite the contrary with a check that suggested that the owners felt that the food was more sparkling that it was.

However, over the past two years, I have had several improved meals at Madison's, culminating with an excellent dinner last night. The chef de cuisine (at the restaurant for two years now and now in charge of the menu) is Chris Huerta, who worked with Guenter Seeger in Atlanta (at Seeger's, which, until it closed in 2006, was Atlanta's premier restaurant - Seeger is attempting to open a New York restaurant) and who was a stage at Per Se. Huerta is a serious young cook with a serious blog ("Chipped China"). My friends and I were very pleased with the style and assuredness our meal. In strictly culinary terms Madison's is - by some distance - the most accomplished restaurant in the area (go to On the Verandah for the view and good food). Madison's has a quite pretty space and in contrast to some area restaurants is light and airy and is relatively quiet. They also have an ideology of "Farm to Table Dining," which they are expanding - mostly vegetables and pork at this point.

I began with Huerta's Apple and Bacon Hushpuppies (ah! bacon!), which were the best hushpuppies I have ever eaten. Granted claiming that one found the world's best hushpuppies may be akin to picking low-hanging fruit, but they were delicious. A friend had a very creamy (and nicely composed) vidalia onion soup and another companion had a salad of Chilled Local Carolina Shrimp Salad, Florida Citrus, Winter Greens, and Vanilla Citrus Double Cream. Let us ignore the "local" shrimp as we are several hundred miles from the sea in the western Carolina mountains, but the Vanilla Citrus Double Cream was a very becoming complement to the fresh shrimp.

For entree I chose the compelling (although not visually remarkable - unless one likes a symphony of gray and brown) Braised Duck Leg, Celery Root Ravioli, and Stewed Hand Harvested Mushrooms with Natural Jus. It was a luscious combination with perfectly moist duck leg and properly cooked ravioli with its intriguing celery root stuffing. If not quite worth a photo, it was the most polished entree I have had in these mountains since the grand Frog and Owl closed fifteen years ago.

Dessert was an assured smooth vanilla-bean panna cotta with butterscotch sauce and crumbled espresso biscotti and a cornet of vanilla bean (I think) ice cream. Another appealing and modern presentation with a mix of flavors that were delightful, if not quite startling.

Madison's also has an extensive wine list and well-selected wines by the glass.

But for one who spends a month in the mountains each summer, Madison's poses a problem. Should every dinner out be a dinner at Madison's. Is everything else just slumming?

When it comes to restaurants, I can be a bit of a grump. My standard is perfection, and even I can’t meet that standard! Recently my wife and I took a cruise through the azure waters of the Aegean Sea. Now cruiseship food – even if bountiful, colorful, and well-provisioned - can not salve a culinary grump. But every so often we escaped the ship. One of these moments permitted us to explore the beautiful, white-washed island of Santorini, an island formed from the rim of a volcano, which the deity exploded for His own amusement (Santorini sits in a caldera – the collapse of land after a volcanic eruption), the most remarkable spot in the Cyclades. When one comes across a crescent sliver of land so exquisite my thoughts turn to, well, food. (My thoughts also turn to food when viewing a toxic dump or a beautiful woman.)

Still, Santorini is more than brownfields or lithesome legs, it is scenic. Were this insufficient, Santorini is also the home to one of the most astonishing restaurants in all of Greece, and, Michelin not to the contrary, in all the EU. Selene, perched on a cliff in Fira, the main town (in fairness most of Fira is perched on a cliff), opened in 1986 under the guidance of owner George Haziyannakis, who wished to show off the creative nature of Greek cuisine. He succeeded. 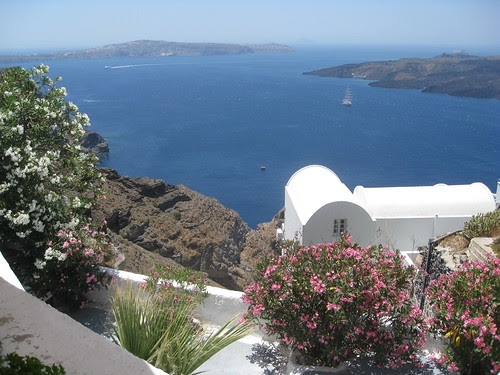 Yes, the view is perfection, but it cannot quite compete with the food. One looks down at one’s plate while the clouds and skiffs pass outside. We began with a pair of soups, cold tomato and warm rockfish and langoustine. The cool tomato was perfection in this warm June lunchtime, although had this been our only course I would have noted Selene as a most pleasant boite. The seafood soup was pure cream and sea: impeccably rich and sweet, with ingredients that revealed that locavores have a point. 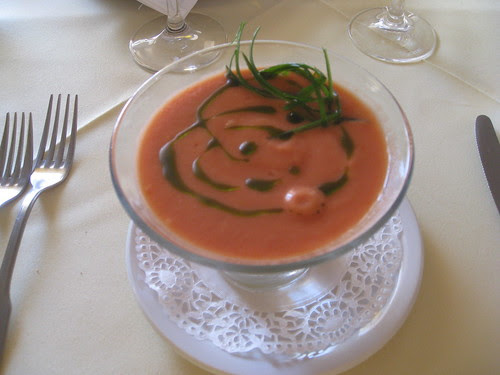 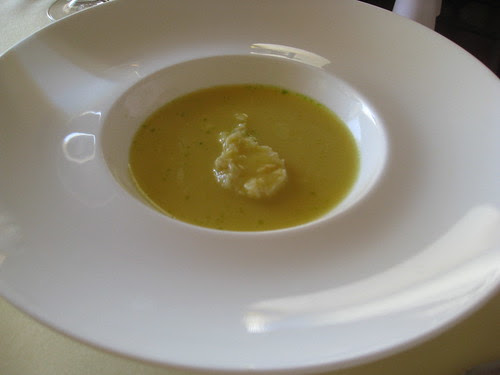 These soups were followed by an appetizer of local bivalves with lemon foam – molecular cuisine in the isles! – paired with potent seafood tartlets. Here was a chef who was aware of both the standards of modern cuisine and the robust cookery of the Aegean. Again the local clams were salty-fresh and the buttery tarts composed of the finest catch of the wine, dark sea. 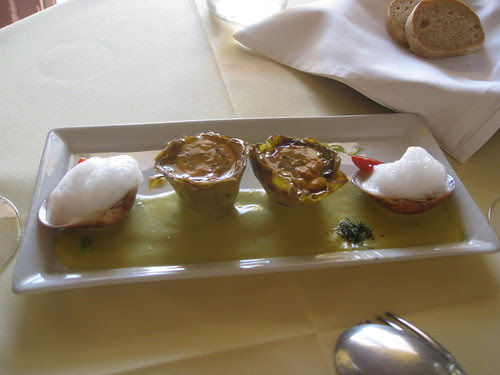 But truly it was the main course that was spectacular: that afternoon I fell in love with all things Santorini. As is clear from the photo the ravioli is not the enclosed, Italianate pocket pasta, but rolls of perfectly cooked strips with – again! – blessedly fresh seafood with plump mussels and delightful squid, so perfectly prepared that the word rubbery was banished, and authoritatively and sharply seasoned crayfish and shrimp. 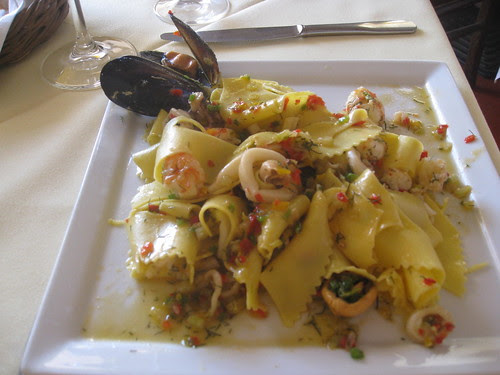 As magnificent as the ravioli was, it was surpassed (just barely!) by the risotto: rice in a fava bean sauce with a juicy roasted rabbit with an evocative rosemary jus: symphonic notes of Greek cuisine, but so expertly prepared that it would have been perfection if prepared by Escoffier. A month later I still dream of this brilliancy. 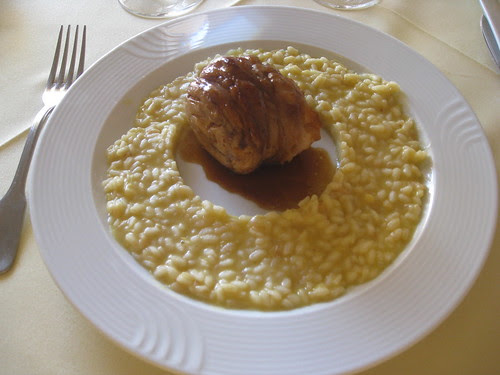 To close the afternoon, we were served a sturdy baklava with a startling Niotiko cheese ice cream. Not a showy dessert, but with the view appearing again, the dessert served its purpose. 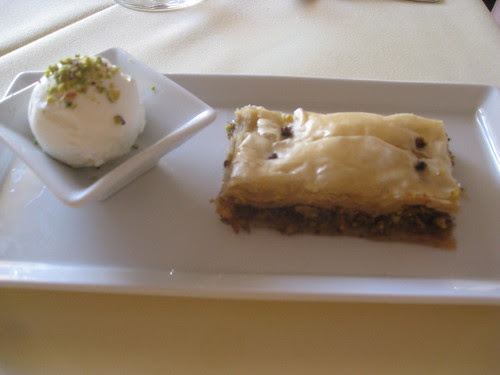 Never have I been so pleasured by the combination of taste and scene. With God as designer and with Selene’s own divine kitchen staff, any grumpiness must quickly be voted off the island.