Our nation's capital is a town of borrowed bliss. What pleasure that is available originates elsewhere: Rembrandts, cherry blossoms, injera. In culinary terms, do not search for Potomac cuisine, only cuisine on the Potomac.

My recent dinner at the estimable Citronelle illustrated the point. Citronelle is a restaurant easy to admire, hard to adore. It presents an updated classicism, like so much Washington architecture. Michel Richard's Citronelle aims for three-point-five stars, well-satisfied in its deserved achievement. But it is achievement. Still, a tourist wonders whether Chef Richard is still the creative force or whether the kitchen is fully governed by Chef de Cuisine David Deshaies.

When one describes a restaurant as bustling, one often means that customers cram the corners. Citronelle is an establishment in which bustling describes the staff. There are a dizzying and dazzling number of staff charging through the dining room. Each is competent and thoroughly trained (one described lemon as lime, and immediately returned to correct the flub). But Citronelle is one of those restaurants in which the relationship of the dinner and her server is downplayed. Look up and a new face is hovering above. The open dining room - with views of the wine cave and kitchen - was comfortable, although today when architects and designers compete with chefs, Citronelle will not receive attention from Architectural Digest.

I selected the tasting menu (labeled the promenade gourmande) and the well-chosen wine degustation. Considering that several courses were composed of a trio of tastes, this consisted of fourteen courses. Three dishes were magnificent; two were unappealing (both small courses), and the remainder were exactingly prepared, impressive, if not dazzling. What is most notable is that Citronelle doesn't ignored the past, the classic. Perhaps as a result, mesmerizing innovation was a minor component of the tasting menu. The degustation menu felt as if it was not newly minted; the goal was to keep the gustatory machine purring smoothly: both a virtue and a limitation.

The amusi were three tastes: a barrel of laughs. Least successful was what was labeled the "egg surprise," hopefully not because of the taste. Perched on a sculptural spoon was a wedge of hard-boiled egg, joined with mozzarella, a cube of translucent tomato confit, and crisped rice. While the ingredients seemed eager to please, the amalgam had an off-taste, perhaps from the confit. The idea of the construction bettered the execution. The second entree, a "mushroom cigar" surrounded by a pool of ginger sauce, was a Francophile take on the egg roll. I endorse the two crackly, earthy bites. But the best of the trio - and perhaps the high-point of the meal was a marvelously herbal "haricots verts tartar": a combination of baby green beans and shallots: traditional ingredients with a happy twist. I didn't discover the nature of the dressing, but the dish was simply sublime and sublimely simple. A few classic ingredients, carefully chosen, can reach rapture. 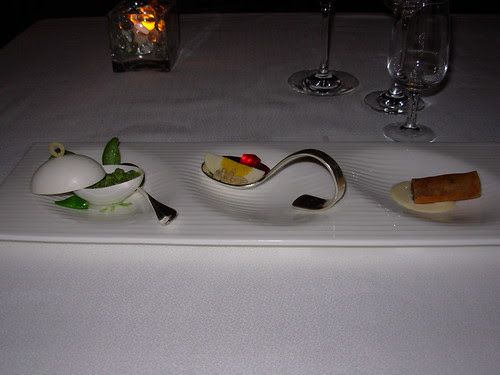 The tasting menu began with a robust Roasted Chestnut and Peanut Soup. This is not the transparent liquor of modernist cuisine, but a real soup with a rich meaty base. The empty bowl was decorated with foie gras dots surrounding a mound of duck confit. The most distinctive taste was smoky pork, although the chestnut and duck notes were clearly evident. There was less evidence of peanuts than I had expected. It was more meaty than nutty. A soup that might have been a tribute to the Virginia goober country bowed to old Paris. 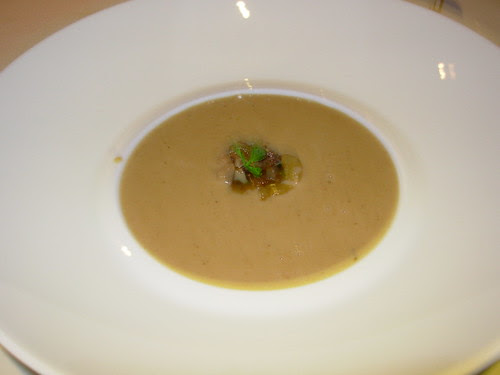 The next dish, as if to mock my Chicago residence, also contained foie gras. This was an elegant Foie Gras-Beet Opera Cake (with a celery root layer) with accompaniments of beet brunois and celery root salad. The dish was more interesting visually than in strictly gustatory terms. The flavors were not sufficiently bright as to make the cake exemplary. 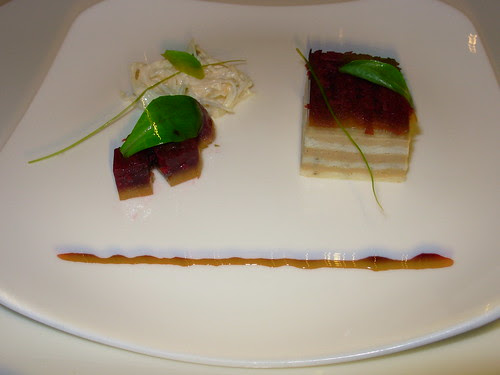 The first seafood dish was the most evocative course of the night: Rockfish with Vegetable Pearls (Rutabaga, Zucchini, and Carrot) and Lemon Verbena Emulsion with Crispy Rice. The perfectly-cooked rockfish benefitted from the verbena emulsion, adding a subtle complexity to the otherwise mild fish, and the rice and pearls added an intriguing, modernist textural contrast. This dish revealed the Chef Richard's debt to classical French cuisine with a light and contemporary sensibility. A triumph. 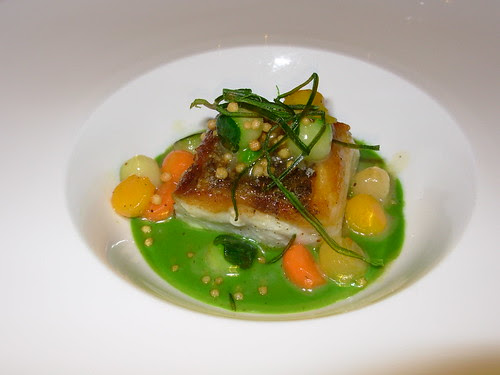 Lobster Burger with homemade potato chips was a conceit. By now such a dish seems routine, and not the most inspired use of a succulent crayfish. This was about all that a lobster burger could be in a fine dining room, but, without sea spray, it never stood a prayer against a perfect Down East lobster roll. A good but wasted course. 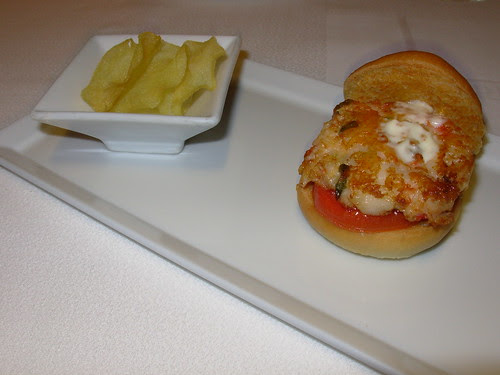 Squab "minute steak" with potato fried rice and citrus-ginger emulsion was another conceit, although more successful in that the comparison with a minute steak was primarily visual. The citrus-ginger sauce - and why not call a sauce a sauce - brought out the slight "gaminess" of the squab without overpowering the quiet poultry taste. 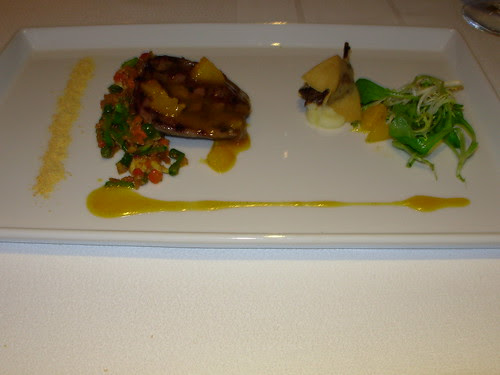 The star dessert followed: Raspberry Vacherin accompanied by raspberry meringue, fresh strawberries and meringue sticks. The photo indicates the craftsmanship of the construction, but the dessert was more than architecture. It was deeply fruity and luscious. This vacherin matched the main courses in its debt to classic cuisine and in its nod to a lightened contemporary taste. 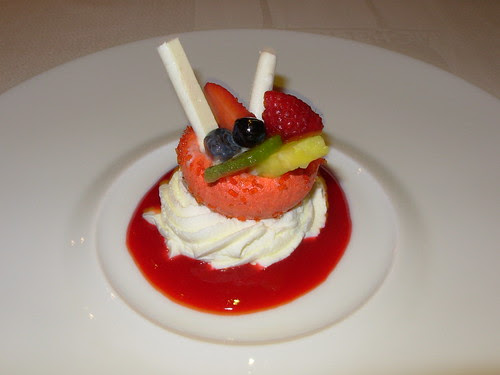 The final course (not including the petit fours) - Chocolate Three Ways - consisted of a rich and smooth chocolate ice cream, an excellent, evocative and buttery coconut macaroon cake with an elegantly swirling chocolate cookie, and a chocolate panna cotta with coffee topping, with jarring, "off" flavors. (Confession: coffee is not my preferred flavor). 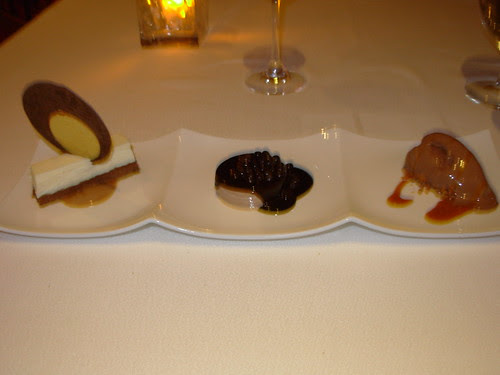 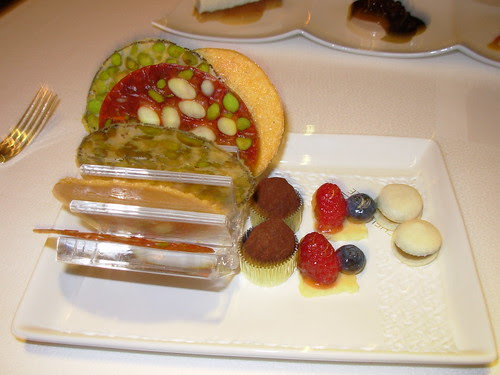 Chef David Deshaies is the Chef de Cuisine of Michel Richard's Citronelle, and his talent is not to be denied. Of the foremost American restaurants, few now rely on classic culinary inspiration as much as Citronelle. The finest dishes - notably the monkfish and the vacherin - are contemporary inspirations of the classic. And yet this debt tethers Citronelle to the past, rather than opening the door to an amazing cornucopia of the future. Still, Citronelle reminds us that contemporary cuisine stands on the shoulders of giants.