Some days my wife decides to play vegetarian. Unlike bunnies, carrots lack a pretty face. It is an identity that while enthusiastically held at times is not a consistent self. I am not condemned to a beef-free hell. Still she believes that being a vegetarian is a worthy identity, and often at restaurants with tasting menus, she selects the vegetable option (and as often as not she has won in our best dinner competition). But since we were visiting Napa Valley, after having buttermilk fried chicken at Thomas Keller’s Ad Hoc the night before, we selected lunch at Ubuntu, the combination restaurant/yoga studio in downtown Napa.

In its early days, Ubuntu was known for the skills of chef Jeremy Fox. But as often happens in the culinary biz, the magic could not last. It was reported that after a 3:00 a.m. meeting (the end of the work day for some chefs) much of the staff decided to resign en masse. I have not eaten Chef Fox’s cuisine, and have no way to compare then and now. Fox was replaced by Aaron London, who had been the chef de cuisine, but even with his experience this was surely a difficult transition following a beloved chef.

While I didn’t find Ubuntu in its current formulation a startlingly brilliant restaurant, it is a very satisfying one: filled with light and air and with light and airy food that makes a real effort to please. Many fruits and vegetables and herbs on the menu are grown in the restaurant’s biodynamic garden. 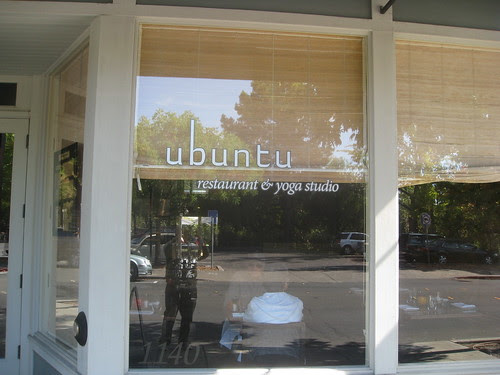 We ordered four dishes (each between $12-$17), and they were satisfying for a lunch. The dishes were well-composed, although in a few cases they read better than they tasted. I would have preferred big tastes, although two of the dishes were excellent.

We started with a clear cantaloupe and sage gazpacho with radish and compressed and blackened pickled melon. I imagined that this would be a powerful dish, and we ordered it thinking that it would startle us. The dish itself, although pleasant, was mild and straightforward. Each ingredient was fresh, but the combination was less than its parts. 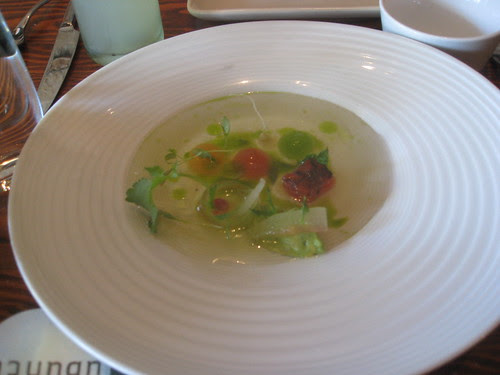 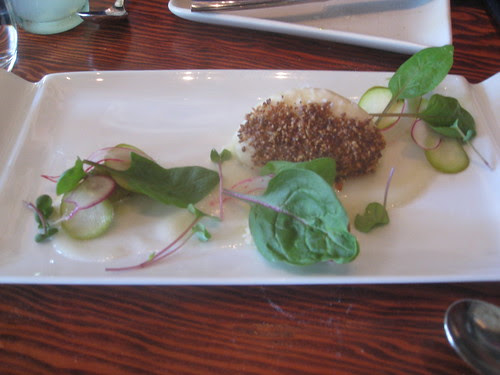 Much better was Ubuntu’s take on macaroni and cheese: garden inspired extruded pasta with spiced fiore and confit gajo de melon (a type of tomato). This clever dish was substantial while avoiding the gumminess of mom’s (or Kraft’s) mac’n’cheese. I delighted in its Gouda goodness. 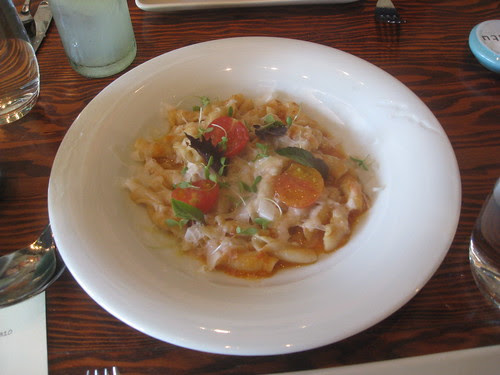 The best of our midday repast was the “inside out” grits cooked with goat’s whey and blistered pardon peppers and beans with smoked corn husk. It was a distinguished dish, even if I couldn’t figure out what constituted the “inside-out-ness.” But the beans and peppers were dramatic counterpoints to the ricotta and the creamy grits. At the price, I could have carried home a gallon. 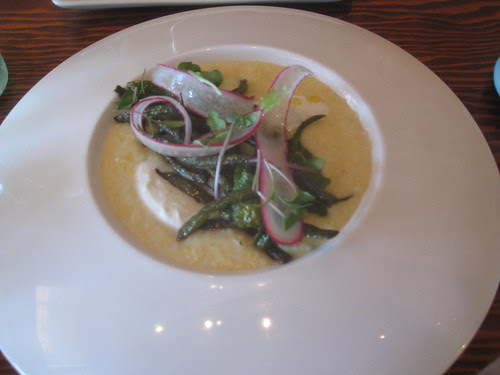 When one dines at a restaurant that was once canonical, it is hard to determine if it has slipped or has maintained all of its virtues. I was impressed by the confidence of Chef London, even if his bravery might have been kicked up a notch. Perhaps each dish could have benefited from bacon, but that comment is just the sort of snarky remark that those who run a combination yoga studio/restaurant must put up with from the fat and comfortable. Bacon or no, Ubuntu is worth a visit.