As I frequently announce, my favorite Chicago restaurant is to be found in Milwaukee (perhaps I exaggerate, but only slightly). Sanford, the eponymous restaurant of Chef Sanford D'Amico is a gem, benefitting from its relative absence of the glare of national publicity. (It did make Gourmet magazine's list of the Top 50 American restaurants). Since 1989, Sandy D'Amico has been turning out complex, thrilling dishes in a room that is quiet and sedate. Sanford is a restaurant that doesn't feel the need to hire Norman Foster to design their toilets. After meals at Moto, Alinea, or Avenues, Sanford may seem a bit old-fashioned, but fashion is not always what it is cracked up to be. Sanford's dishes have more in common with those of Trotter, a thoughtful global cuisine, but with a penchant for game (a delightfully undercooked chargrilled loin of elk was on the menu).

My friends and I ordered from the menu (declining the seven course tasting menu at $85; most main courses at Sanford are priced in the low $30s).

My appetizer will surely make my list of the top ten dishes of the year, Lacquered Squab with Salt Cured Foie Gras, Candied Leeks, Rhubarb Compote and Maple Gel. Just like Chicago in an alternative universe that lacks a Councilman Joe Moore. As good as the slightly salted duck liver was, the squab, with its Chinese taste notes, was even better. Although the dish had a sweetness, the sugar was never overpowering. Diners may believe that they love a stark cuisine, but a little bit of maple is a joy. While I sometimes complain about excess complexity, on this plate, all the ingredients combined in exquisite harmony.

To complete the theater of culinary cruelty, only veal can match foie gras. (Once we win the battle of moulard, let us celebrate with some ortolans.) I selected Chargrilled Loin of Strauss Veal with 17 Hour Veal Breast, Crispy Onion Potatoes, Tart Apple and Endive. And no, the veal wasn't slaughtered 17 hours after its birth, that refers to the slow cooking, capturing the essential juices of meat. Here was another excellent dish that reveled in its complexity. The veal was splendid, and the accompaniments added much to each bite. The weakness of the plate was in the chef's generosity in providing accompaniments, which lacked poetry apart from the meat.

Dessert was a richly adequate Banana Butterscotch Toffee Tart with Banana Rum Ice Cream. It was precisely what one might imagine from the description. Very pretty, but more at home at a restaurant with a less creative vision. Chef D'Amico has just opened a high-end Bakery in downtown Milwaukee (Harlequin Bakery) and the dessert seemed not all that different from a tart one might purchase from an excellent public bakery.

On the basis of this recent visit Sanford D'Amico shows no sign of slowing down. His dishes seem neither stale or trendy. Perhaps being head chef in a one-veal town allows one to escape the harsh, hot spotlight of the national gourmet maw. And we Chicagoans like that just fine.

Three years ago molecular cuisine was but a gleam in the eye of some odd visionaries. Here and there (often here, this being Chicago) was a Grant Achatz, a Homeru Cantu, a Graham Bowles, and at a distance Ferran Adria. These Americans learned from the kitchens of Keller and Trotter (and some stages abroad), but they were creating a singular and off-kilter style in their fits and starts. They were building a new paradigm, just as the eminent historian of science Thomas Kuhn suggested was true for Newton.

Over time - and time shrinks in our media saturated era - the word spreads. Outrageous experiments are tamed and become normal cuisine. The opening of Butter in Chicago reveals, if any additional proof is needed, that the molecular virus is spreading beyond its medicinal quarters.

Butter is a sedate, contemporary, and rather elegant restaurant in Chicago's up-and-coming West Loop area. If local avenues are not yet bustling, they will be. After what was a considered a rough start (with some glowing if not overly helpful publicity in Esquire), Chef Ryan Poli, a native Chicagoan trained at the French Laundry, Le Francais, and La Broche in Madrid, has by recent accounts found his place, and perhaps that place is to be in the spotlight. When it became clear that our table had some claim to culinary sophistication, we were invited into the kitchen to meet the chef (the restaurant was about half filled on this Friday). In my year in New York, such an invitation was a rarity, outside of a few chummy West African establishments. Servers might be trained to avoid patronizing their diners, so they won't be so startled if those at the table are not the farm-fed rubes they might imagine.

I won't proclaim our tasting menu as among the truly stellar meals of the year, but it was an impressive attempt to create a menu that bowed to the creativity of a Cuisine Agape while providing enough Midwest Comfort for those who do not chose to indulge in the aromas of laughing gas. I left persuaded that if high-mid price restaurants like Butter were willing to chance avocado foam and bacon ice cream the experiment had become the establishment. (The five course tasting menu was, if memory serves, $85).

We began with a trio of snacks. Shrimp crisps, potato chips, and popcorn with truffle oil. The popcorn was terrific, stressing that truffles are to be treasured for their aroma, not for their taste, much less for texture. Any film would be recalled as a classic with enough of that corn. The other snacks, adequate, were perhaps not worth the time in preparation.

Our amuse was a quite pleasant sweet potato soup with a brown butter gelee. I wished that even in the small taste Chef Poli had ladled more gelee. It just slipped right down. If the amuse was not as elaborate as some, it did demonstrate that this was a restaurant whose jellied hopes were real.

First course was Tuna Tartare with Avocado, Mango-Yuzu Vinaigrette, and Puffed Rice. If the dish seemed tame if rich in Omega-3s, its pleasures should not be held against this chef. In its architecture, the plate bid us recall that we were experiencing a measured construction. The Mango-Yuzu dressing was sparky, enough to insure that no one would conclude that this tartare was sushi in disguise. 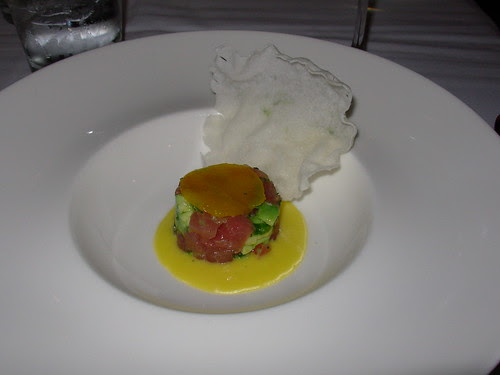 The risotto, bolstered with sweet corn, white truffle oil, and shaved summer truffles, was an exercise in aromatic pleasure. I would have been as pleased without the shaved fungi, but its thin presence demonstrated that the dish was what it claimed for those blessed anosmics. For the rest of us smellers the oil would have sufficed. Perhaps by so much truffle Chef Poli wished to demonstrate his concrete commitment to luxe, but simplicity would suffice. 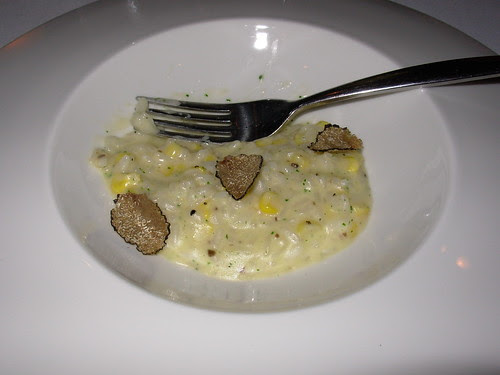 The main fish course was a Stripped Sea Bass (with modern chefs one should never assume typos - but this striped bass was not stripped of its skin). Notable was the earthy mix of "wild mushrooms": hen of the woods, trumpet mushrooms, and - despite the claim of the kitchen - cultivated shiitakes. Many fish dishes over the years will be recalled longer than this bass - stripped or striped. Yet, the well-cooked fish matched nicely its garlicky broth, garlic scapes (not a typo), and gnocchi. Well-conceived and well-executed it suggested that the kitchen was in secure hands. 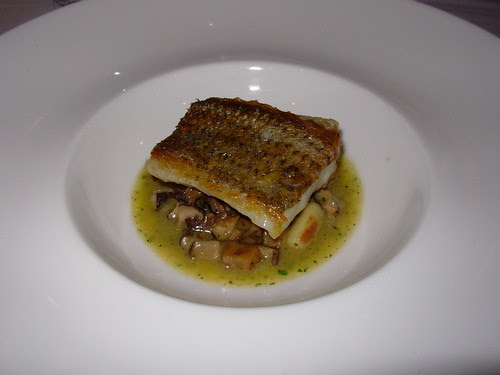 As our beef entree we were presented Kobe Beef Sirloin with Glazed Turnips and Carrots, Kobe Short Rib Ravioli, and Bordelaise Consommé. The ravioli brought the plate (slightly) above Kobe routine, but it was not a dish of remarkable vision. Like the bass, it was admirable in its competence, but lacking in the imaginative zest that one might expect from a FL-trained chef. 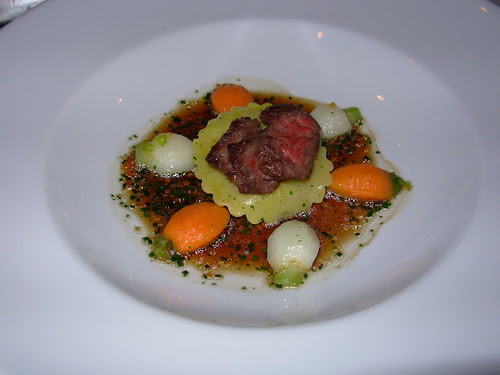 Throughout we were served a set of amuses, amusing, but apparently Alinea homages. The bacon ice cream exemplified cute standards of molecular cuisine, as did an earlier plate with avocado-cilantro foam, celery confit, and "guacamole and chips". It was in these bits and pieces and in his dessert that Chef Poli most clearly signaled his allegiance to a post-modern cuisine.

Dessert was an Italian deconstruction, a fugue of reds and greens - the most post-modern of the main dishes: Cream of Sicilian Pistachio with Semi-Candied Rhubarb and Strawberries and Sweet and Sour Red Pepper Sorbet. The plate was lite up like a Christmas tree in a Curry Hill diner. The pepper sorbet had the grassy tartness of peppers, but one that I found harsh against the creamy sweetness of the nuts and fruits. Where sweetness was, I was sated, but the deconstructed pieces could not easily be constructed, despite the prettiness of the conceit. 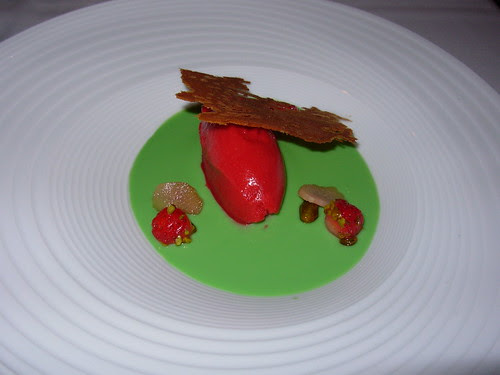 Butter finds a niche slightly below the temples of Chicago cuisine, and this may be proper as Chef Poli weighs his allegiance to Midwestern haute cuisine and to his outrageous brethren. Butter is not yet a destination restaurant, but it is a serious, energetic one. With time, Swanson may produce molecular TV dinners. By then we can think back to Butter and realize that chefs like Ryan Poli helped make these culinary test less fearful, more heartland. Whether we will be grateful as we wolf down Puffed Salisbury Steak with Mashed Potato Foam and Nitrogenated Peas while ogling Rachel Ray staging on Survivor: Joliet, only time will tell.