For some obscure reason, this evening I decided to review some food pictures from the past few months. I realized that I had not described my January dinner at Commis, Chef James Syhabout’s modern cuisine restaurant on Oakland’s Piedmont Avenue. Commis has a space next to Bay Wolf, one of the most important restaurants of post-fusion cuisine of the high-energy 1980s. Bay Wolf was a temple of combinatory creativity, but as I looked at Wolf’s menu I realized how far we have come in technique and in ingredients. Children, can you remember when your fruits, vegetables, and proteins lacked a provenance?

Commis is hip to the new millennium. Of all of the restaurants striving for modernist cuisine, Commis is the most Zen of all. It is so white, so placid, so restrained that for an instant I felt that I had stumbled upon a Methodist heaven or a Jewish hell. It is neither quite: it is architecture filtered through the light of the East.

My wife and I sat at the smooth wood kitchen counter, and were pleasantly ignored, as we ate our four-course tasting menus (two choices for each course for a mere $68, which for this level of cooking is a bargain of epic proportions). Often in such circumstances one communes with the staff, chattering, chatting, and, always, gossiping. Not at Commis. These cooks worked in a focused fugue. We weren’t dismissed, just unseen. The hard-working cooks became objects of observation, not friends. That’s OK, but perhaps it led to a feeling that there was to be no Commis family. Every restaurant has its style, and focus is Commis’s. Chef Syhabout was there, murmuring to his staff. Anthony Bourdain he will never be. He’s a dish whisperer.

Chef Syhabout is a sterling chef, very much in the style of David Kinch, one of his mentors. In this, he is a synthesizer, incorporating styles, techniques and ingredient often with great aplomb. The meal was distinguished with some dishes that were remarkable, and a few that were less so. His cuisine is surely appealing enough to try again. Perhaps the atmosphere overwhelmed with its serenity. (“Serenity Now!”, sayeth Frank Costanza), but the foods had sparks and flash to balance the silence and the white light. 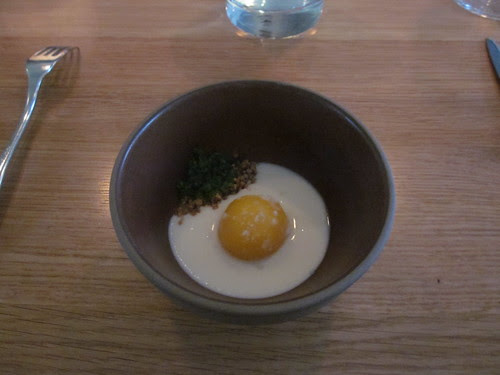 Oysters and Fresh Cider in Sunchoke Cream, Ginger and Radish. An impressively composed dish with challenging and fascinating flavors, with an Asian sensibility. A profound appetizer. 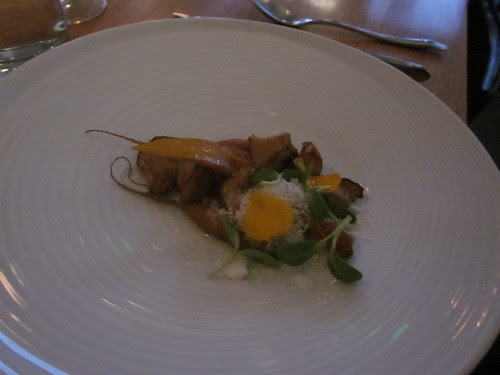 Coastal Heirloom Beans in Onion Consomme, Raisins with Warm Spices. This appetizer matched its sibling in its intelligence commitment to texture and agriculture. A very successful dish in all ways. A lovely soup with surprises peeking everywhere. 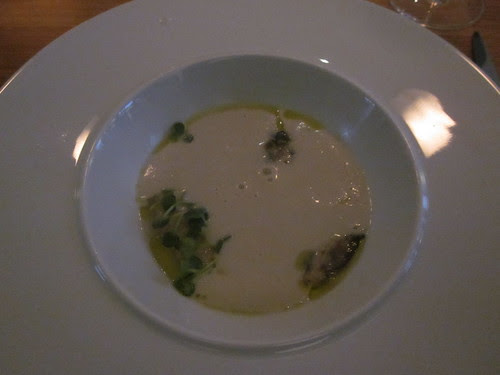 Atlantic Haddock with Smoked Mussel Vinaigrette, Herbs and Cabbage. Dishes like this have become fairly standard in modern cuisine. It hasn't become cliched, but it wasn't astonishing. 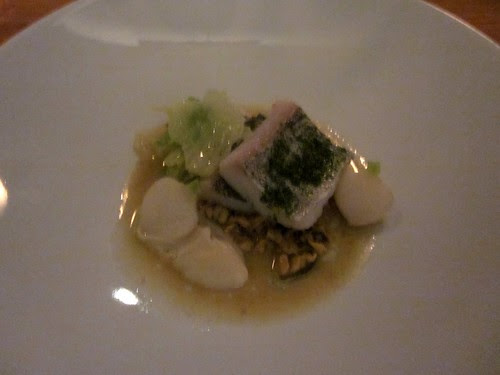 Leeks and Celeriac Cooked with Anise, Citric Crab Emulsion, Wild Lettuce. Along with the amuse, this was probably the most startlingly successful dish of the evening. The crab and anise merged so well with the greens. A quietly triumphant plate. 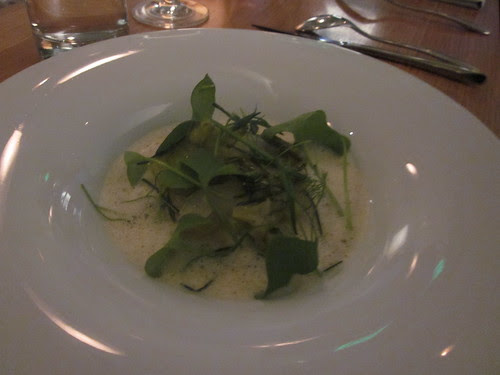 Slow Cooked Lamb with Horseradish Yogurt, Quince and Winter Greens. Well-cooked if somewhat fatty lamb but with enough interest with the accompaniments. 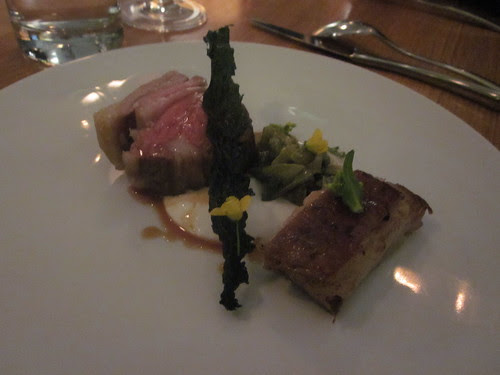 Pressed Guinea Fowl, Young and Braised Garlic with Potato. This was the least effective dish of the evening. It was somewhat bland, perhaps it was too much of a classic throwback. 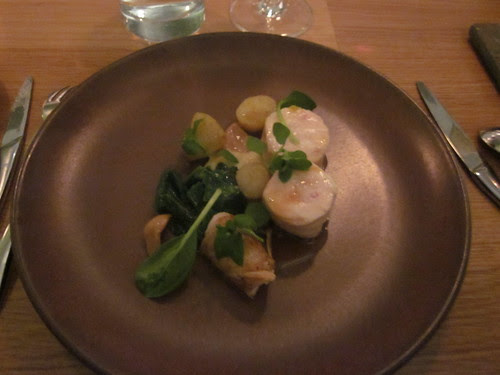 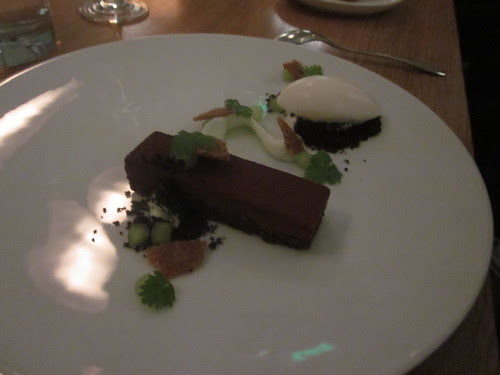 Panna Cotta Scented with Winter Citrus, Pomegranate, Coriander. A very pleasant modern dessert. The two desserts had less interest than the appetizers, as so often is the case. 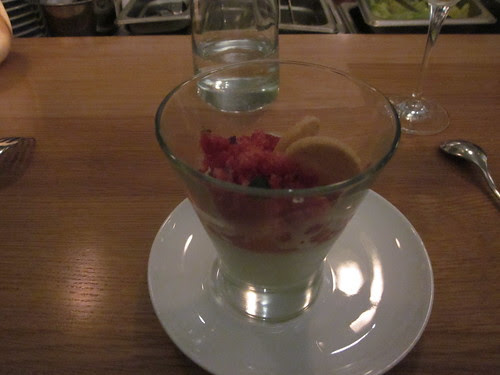 David Kinch, the esteemed chef at Manresa, is perhaps the most accomplished shape-shifter in American cuisine. But maybe I am the one who has been unable to pin his butterfly wings. I have found French, Catalan, molecular, and Japanese nods in his preparations. Two weeks ago some friends and I attended the nine course Citrus Modernista that he and his friends at Love Apple Farms prepare annually with the crucial contribution of Gene Lester and his citrus orchards above Monterey Bay.

It was a very impressive evening throughout – and surprising. Walking through the doors I expected that it would be citrus all the way down – tangerines, pomelo, and Buddha’s hand. A symphony of pastel. Indeed, there was a lot of citrus: wekiwa tangelo, meyer lemon, etrog citron, Mandarins, bergamot, poorman orange. Still with all this variety, I was startled in that in most dishes Chef Kinch used citrus delicately and supplely.

My wife and I used to amuse ourselves by preparing meals with one ingredient to be found in every dish, the more bizarre the better: the best was the banana meal, the worst, the liver meal. This foolishness is, of course, the conceit of Iron Chef. But when we played the game the goal was that the ingredient would be front and center. This is not Kinch’s style.

Once one overcame the surprise of subtlety, the meal was filled with wonder. The theme of these dishes emphasized Kinch’s love of gathering, of modest ingredients. More than previous dinners it was a meal that paid tribute to the New Naturalism. It was not exclusively found foods (foie gras does not lay about), but the connection of kitchen and ground was evident. The dishes pulled back from the drama of a cuisine of astonishment to reveal the power of a cuisine of consideration.

Perhaps I was more struck by the lengthy Japanese tasting menu I was served last year, but Citrus Modernista was a tour de force, particularly as it is a one-off, never to be tasted again. And perhaps it speaks of Chef Kinch’s desire to cook food, rather than to cook theory.

Foie Gras and Buckwheat Crisps, Marmalade Bouquet de Fleurs. A pungent beginning to the meal. Perhaps it was a twist on a cliche - with foie gras replacing the expected caviar - but none the worse for that. 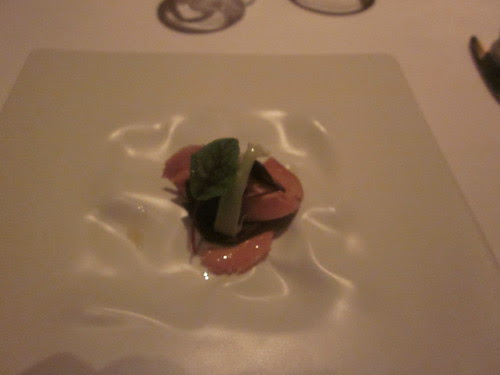 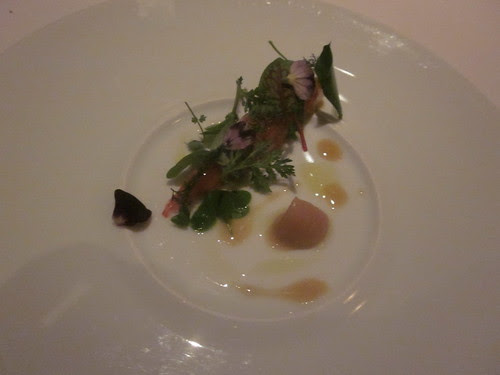 Mackerel Marinated in Sake Lees, Charcoal Grilled with Seafood Salsa Verde , Assorted Clams with Sampson Tangelo, Salted Butter. I felt that this composition was the best dish of the night. It was a wonderful combination of textures and tastes, well-considered. Another of the increasingly popular mackerel dishes. 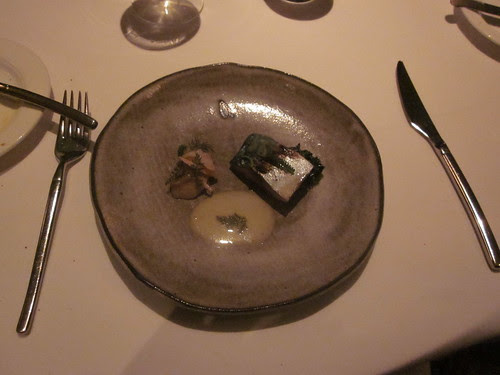 Scallop Shards and Dungeness Crab, Kyoto Miso with Etrog Citron. This was another fine and considered collection of tastes. 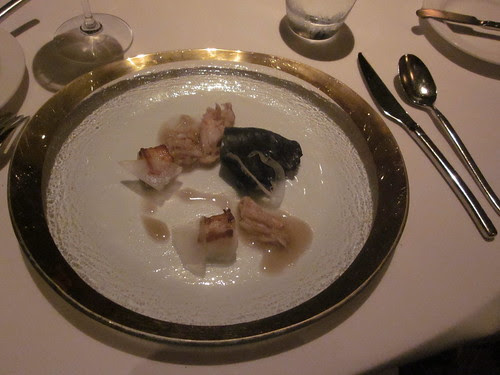 Black Cod, jus of bones and Beef Skin, Brassicas and Flowers with Ginger, Dill and Kabuso Citrus. This was another splendid dish, one of the more beautiful of the night, and the dish most gathered. It had just the right mix of flavors. 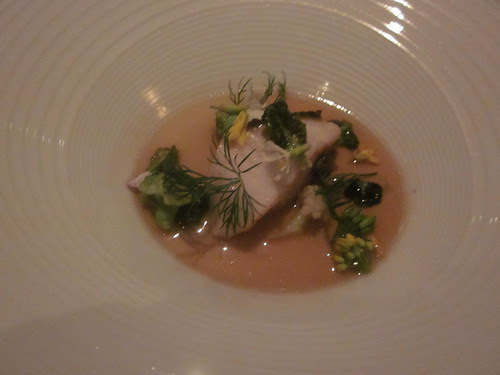 Roast Guinea Hen Jelly, Assorted Mandarins with Pickled Cucumber and Roast Peanuts, Bitter Chocolate with Bergamot Orange. Not the prettiest dish of the night, but the flavors were fine and the guinea hen was remarkably tender. 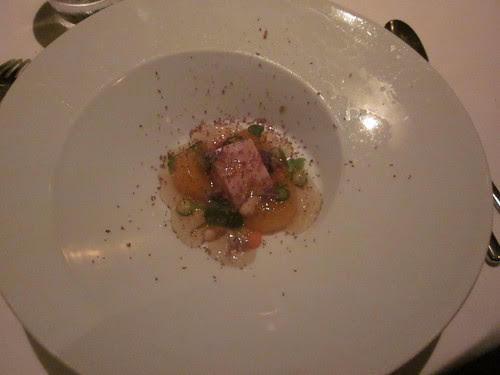 Hot Spring Egg and pure Akaushi Beef Sirloin, Black Tea and Dried Tuna Bouillon, Chestnut with Bergamot Orange. This was my least favorite dish, although it was fine. Chef Kinch likes to mix beef and veal with tuna and tea. The orange was quite subtle, but it couldn't have been more prominent without throwing the dish off. 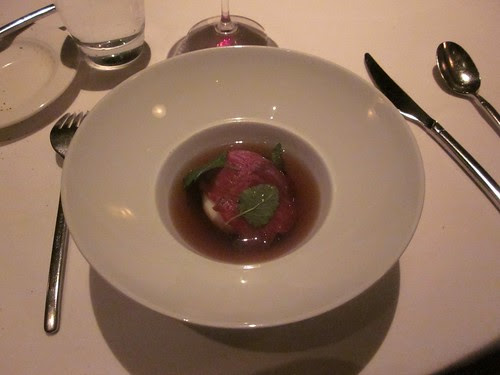 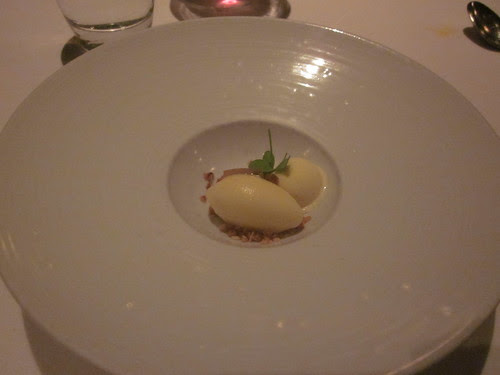 Yuzu Souffle Cake with Herb Sorbet, Exotic Citrus with Honey and Spice, Olive Oil and Almond Crumble. This was the most sustained and deep tribute to citrus with a nod to molecular cuisine. It was one of the strongest dishes of the night, and sent us into the street with a tangy fruity glow. 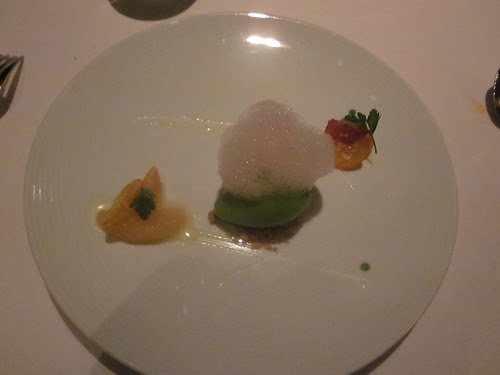