I enjoyed a splendid lunch at Blackbird. A wonderful way to end a year of eating. The food at Blackbird really flies. At its best Chef Kahan's cuisine is as creative and accomplished as any chef in town, perhaps less elaborated but with a startling and compelling mixture of tastes and textures.

I began with baby octopus confit with braised chestnuts, empire apples, pea tendrils and sassafras caramel. This construction was as fascinating and wildly textured as any appetizer I have had for awhile. Chewy, crackly, smooth and crunchy. Sweet and just a bit sour. A truly magnificent dish. 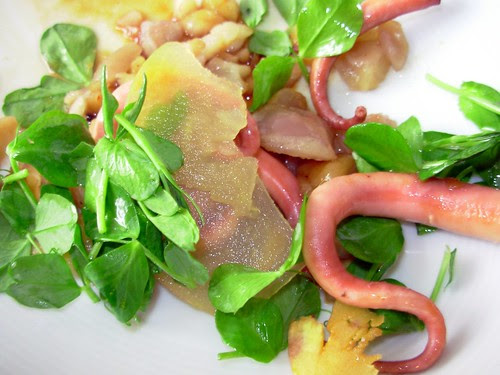 As an entree I selected slow roasted duck with fried byrd mill grits, citrus brussel sprouts and puffed wild rice. I was blown away by the finely threaded brussel sprouts - the emotional heart of the dish. The duck, grits and rice, well-cooked, played a supporting role. 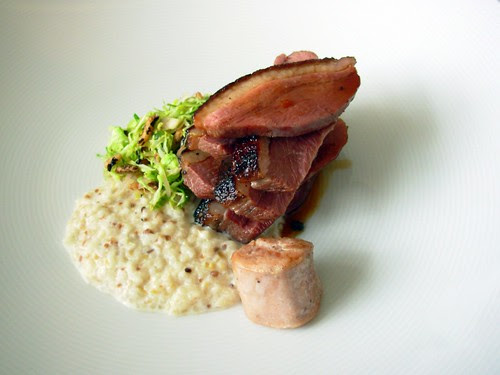 Dessert was a beautifully composed mission fig beignet with cara cara oranges, butterscotch and bacon ice cream. I have been rather critical of desserts as late, but not this. Like the appetizer, this was one of the most sensational and brilliant desserts of the year. The bacon ice cream seemed simultaneously surprising and totally natural. What a lovely way to end the year. 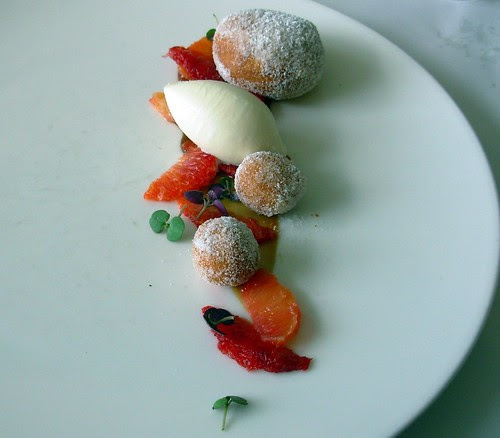 Why then is Blackbird not often listed in the company with other four star restaurants, where, by virtue of the food it belongs? When Blackbird opened a decade ago it was sleek and chic. But time has taken a toll on the restaurant. The restaurant no longer seems as stylish as it had once been. The plates don't need to be refreshed, but the tables might be. The room is so 1999! The food is so tomorrow!

Schools must exist in which aspiring chefs are taught to name their culinary domains: Alinea, Per Se, Moto, WD-50, and Washington’s CityZen – a preserve for citizens of a certain level of refinement and resources. CityZen is located in the Mandarin Oriental Hotel in Washington’s new Southwest side. And before we get to the cuisine, the restaurant, although quite pretty is pretty in the way of upscale, contemporary, luxury hotel dining rooms. Serviceable in a post-Millennium sort of way. Speaking of serviceable, service was more than serviceable, it was congenial and helpful.

There has been debate about the level of cuisine at the new venture of Chef Eric Ziebold, formerly at the French Laundry. The food is indebted to Keller with its attention to combinations of flavors and textures, occasionally borrowing from – or contributing to – an experimental cuisine. But how far can Ziebold push his clients? Can Washington ever have truly outstanding cuisine: is that the cost of living in a town in which the prime hunger is for power, not flash, flesh, or fowl? After a recent dinner, choosing the tasting menu, I am among those who rate CityZen highly – except for the bread, more about that later. While my meal was not always astonishing, it was in most regards of the highest order with several remarkable dishes. In comparison to Citronelle, Komi, Kinkead’s, or even Minibar, it is CityZen to which I would first return. Ziebold gives prime of place to simple, simply prepared proteins and surrounds them by zesty combinations.

We began with a pair of amuses, prior to the tasting menu parade. The stronger of the two was a nifty fungal symphony: A toasted mushroom egg puff covered with mushroom powder. This fritter was an earthy, but otherworldly, tribute to late fall. The flavors were deep and the multiple textures clever. It did what an amuse should do, awaken one’s senses to future surprises by the depth of taste. 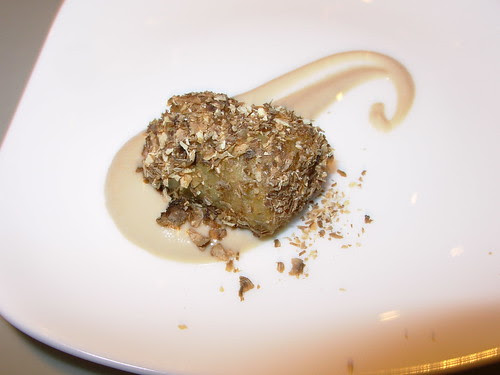 The second small plate (is the second amuse still an amuse: when does it become an unadvertised appetizer?) was what I recall as a garlicky mousse-filled gougere situated on a lentil salad. The pastry was as flaky as one could desire, although perhaps slightly salty for my taste. 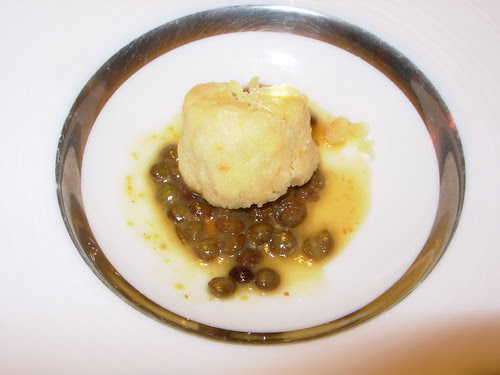 Our first course was as dazzling as a Miró canvas: carpaccio of Atlantic Fluke with Gans Ranch Fuyu Persimmon (even fruit has a provenance), Puffed Japanese Sweet Rice, Micro Peppercress and Pomegranate Vinaigrette. The fluke when cooked properly is a mild and subtle fish, more thrilling for its texture than its taste. Dotting it were the other ingredients, transforming each bite. This is a striking dish, witty and cunning. The taste of the fish ebbed into the background, permitting the vinaigrette a gustatory ovation. 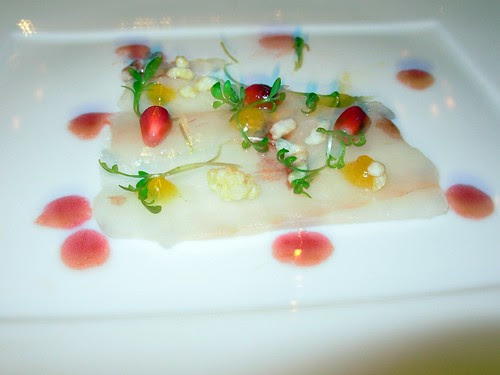 Grilled Atlantic day boat scallops with Belgian endive marmalade, citrus velouté, and lobster infused oil was another surprising dish in that, as with the fluke, the scallops, a mild seafood, furnished texture to savory supplements. Although scallops might not seem to be an ideal partner for a sour citrus, the addition of marmalade and lobster oil created a dish that was dreamy, if not dramatic on the plate. It was lush and tangy without being jarring or busy. 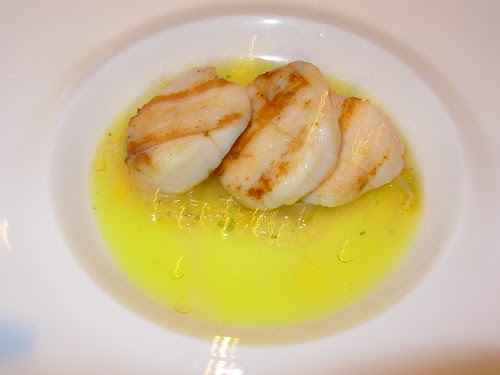 The third plate – Polly-Face Farms Poussin – was similar to the previous two in that it was based on a mild center and savory edges. Authentically produced in western Virginia with Michael Pollan’s blessing (despite the misspelling of Polyface Farms – not only green-card eateries that don’t spell-check), the poussin was paired with dried currant and Italian pistachio mousse with parsnip puree, sugar pie pumpkin and Swiss chard roulle. Simple and pure as the chicken was, the accompaniments made this dish special. The pumpkin and chard roulle was Chef Ziebold’s most memorable presentation of the evening. Again the chef maintains an austere urbane zen-like calm at the center of the plate while circling the center with pungent intensity. 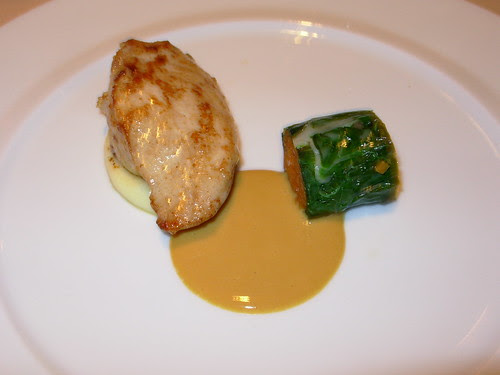 The meat course was braised A1 Direct kuroge beef shortribs with marinated beets, cipollini onions and caramelized salsify (I don’t know what A1 Direct might be, but the firm seems uncomfortable like a company that attempts to cadge customers by being listed first in the Yellow Pages). The beef was itself more dramatically flavorful than the chicken, scallop, or fluke. However, the plate became innovative because of the surroundings, passionate beets and sumptuous salsify. Without the accompaniments this would have been a good dish, with them it was robust and flavorful. 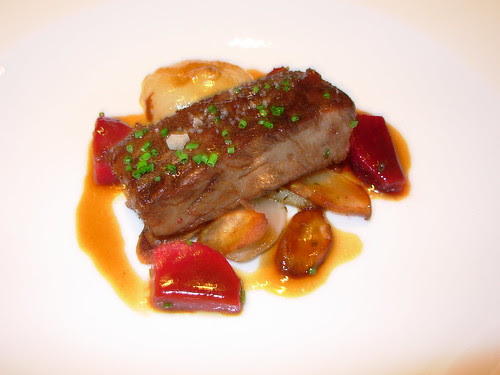 Shortribs were followed by a nicely presented cheese course with some dozen cheeses of varying provenance (A1 Direct?). Since we talking cheese, bread comes to mind. The breads (raisin, bacon, sourdough) from Uptown Bakery were uniformly, uh, awful. CityZen Pain. A four star restaurant should not be serving bread that flirts with stale. I was informed that in 2008 CityZen will be baking their own bread, so clearly they understand their problem. Why an aspiring four-star restaurant would choose to serve bread this pathetic is a mystery. Are there no Ritz Crackers to be had? In fairness, the mini-Parker House rolls, prepared in-house and served with the shortrib, were terrific. They should have been on the table from start to end.

Of the concluding courses, I preferred the palate cleanser, pineapple sorbet with coconut foam and rum gelee. As refreshing as the taste, it was the compelling textures that make this piña colada appealing. 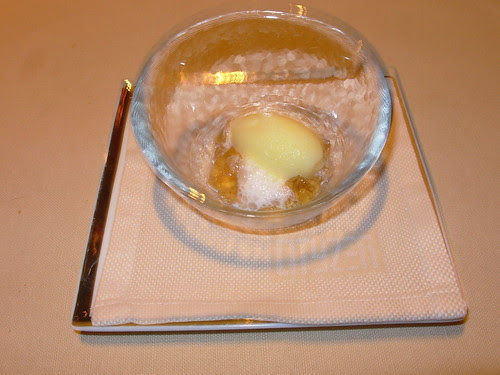 Dessert was cheesecake chiboust (a custard-textured cheesecake) with soft graham cracker and passion fruit sauce, a pleasant change from leaden cheesecakes, and like the earlier course, combined a mild middle with a tart accompanying sauce. However, this passion fruit sauce was not so dramatic as to raise the profile of the dish above the pleasant. 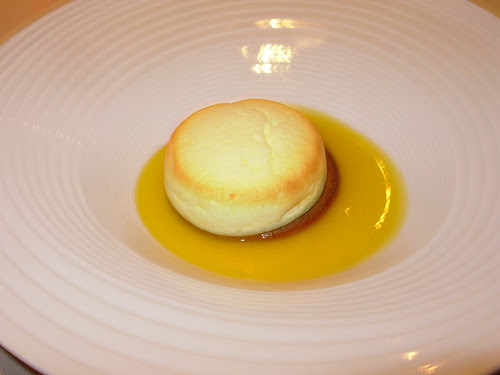 CityZen is a distinguished restaurant with a clever chef and clever name. Chef Ziebold has a style that combines a purity of protein with zippy purees, mousses, volutes, oils, vinaigrettes, foams, and marinates. Through his signature style, he forces us to recognize the perfection of central ingredients, even while informing us that there is wild culinary world outside the gates. This is a important message, even if it might permit us to recall the “just” chicken, seafood, or beef and slight the pungent skills of the chef that made it so.

A fine line separates a culinary signature from a tic. Earlier this month I was in for a week, and at the suggestion of friends I tried Komi, Johnny Monis’s Greek-inflected, slightly rustic, comfortable hot spot. And there is much to like – the service, the collection of well-composed Greek wines (and not a stereotypical Retsina) and the finely-prepared cuisine.

This night my companion and I selected the dinner: a selection of nine mezzathakia, a pasta, an entree, and dessert. We were well-treated. My only complaint was granular. This chef’s four letter word: salt. Sometimes dishes are oversalted out of incompetence: that is not the case at Komi. Chef Monis uses salt to add zest, a taste dimension that often characterizes his dishes. Once or twice during the meal would have been memorable, but the number of dishes that included salt as an ingredient or distinctive flavoring was startling. From the roasted dates with fleur de sel to the oversalted (although perfectly moist) spit roasted katiskaki (goat) to a rather unpleasant Meyer Lemon granita with red sea salt to salty pecan gelato (this I did not order, but there it was on the menu), one could not escape the condiment. Perhaps we should not have been surprised when the farewell gift was a salted caramel lollipop. A chef whose inventions are as distinguished as Chef Monis can find other ways to enliven his plates.

Of the mezzethakia I particularly admired the exquisite, lush cauliflower panna cotta with American caviar, langoustines, and sea urchins. The braised octopus with poached quail egg, capers, pig knuckles (?), and lentil salad was memorable as well. Also successful was a poached lobster salad with bottarga. Both of our pastas were sublime. I particularly admired the tagliatelle with rabbit, snails and eggplant. Here is a chef who knows how to cook al dente. My companion’s rock shrimp risotto with Meyer lemon and sumac-braised pistachio was filled with delicious surprises. Even in my year of dining in , I never was treated to such a pair of pastas.

As our main course, we selected the spit-roasted katsikaki – as moist a goat as can be imagined with a delightful crunchy skin. Had the salt been halved this would have been an astonishing dish. The side dishes, pickled plum, Greek oregano, eggplant puree, truffled beet tsatziki, and Habanero hot sauce added complexity to the goat and homemade pita. At first bite the salt added to the pungency of the dish, but soon I wished for pure goat. The sides could have provided the pungency.

Dessert – toasted almond cake with bananas and rum zabaglione was pleasurable – and not at all salty – flavorful but slightly dry for my taste.

I hope to return to Komi on my next visit to with a doctor’s note a demand to lighten our sodium footprint on this fragile planet.