The 2006/7 Zagat's Guide to Chicago Restaurants - bless its tiny democratic heart - awards Carlos, Carlos and Debbie Nieto's contemporary French place near Highwood's restaurant row, a ‘29,' the highest accolade in all of Chicagoland. Is Carlos Chicago's best? Perhaps not, but unlike our T&As - Trotter's, Tru, Topolobampo, Alinea, Ambria, and Arun's - Carlos finds few detractors on Nina and Tim's three-point rating scale.

Despite this uncertain accolade, Carlos may receive less attention than any other serious culinary location. It is not that the cuisine at Carlos - or its chef - are old-fashioned. Granted this is not molecular cuisine, but it certainly is aware of and indebted to contemporary trends. And Carlos more than borrows. The menu is as creative as the most impressive contemporary fare in the region. Perhaps Carlos suffers from its location on the border of Highland Park (although Vie, Le Titi, and Tallgrass, much less Le Francais, do just fine), or perhaps from the sense that it a proprietor-driven restaurant (Carlos Nieto receives the press), rather than a chef-driven one. Can you name the chef at Carlos? It is Ramiro Velasquez, and he can hold his own within anyone in this diner's town. Still, one of my most pleasurable meals in the last few years was a Valentine's Day dinner at Carlos, and my wife and I determined to return before New Year's.

Carlos is not an establishment that trades on its frightening pretensions. Indeed, one might consider the smiling, congenial staff to be too playful, lacking in gustatory gravitas. Unlike restaurants that are so filled with themselves that they provide a genealogy of each ingredient, most dishes at Carlos are served without explanation. The cheerful, competent staff is largely Hispanic, but I found no Iberian bows in the dishes. Borrowing from older culinary traditions, servers dramatically whip away the silvered covers of serving dishes, surprising diners with the pleasures underneath. The wood paneled room is comfortably understated, not an architectural gasp, but warm and inviting.

Because Carlos looks into Chicago from its perch in Lake County, our amuse was a tiny ramekin of foie gras, quail egg, radicchio, finely chopped vegetables, and the inevitable microgreens - a finger in Richie Daley's eye. Put aside the politics, the dish was an awakening. The compilation was complex without being overwhelming, and the flavors, smooth and creamy, just short of bold, were well-modulated. This was an amuse in which the chef was explaining his authority, both in his choice of ingredients and in his confidence in his craft.

We both selected the Degustation Menu, a seven course parade, with a pair of choices for the larger appetizer and the entree. In addition, Carlos invites diners to select choices from the a la carte menu. An inexplicable quirk is that some changes carry a heavy upcharge, while others do not. One can order Chilean sea bass without additional charge. However, if you choose John Dory, you pay $15.00! Both dishes are priced at $39.50. Go figure.

We began with a lovely "Parsnip Bisque with Roasted Chestnut Mousse and Valrhona Les Perles Craquantres" (petite Cocoa Puffs). The presentation was an artistic dream, and the soup as bracing as a warming hickory fire. Chef Velasquez laid down a marker; he has a contemporary sensibility. The bisque was a brilliant launch. It is not Velasquez's style to overpower, but those bits of Valrhona confirmed that this was no homey, safe cuisine. I have only eaten at Carlos in winter; I was itching to learn of their summer cuisine. 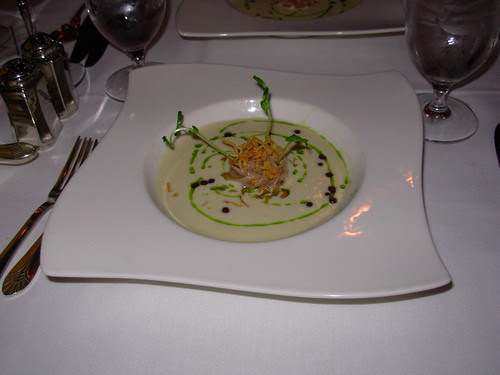 "Mountain Huckleberry Glazed Squab Breast with Grilled Pears, Shaved Fennel and a Cabernet-Wild Mushroom Reduction" was another impressive composition. Perhaps it borrowed too heavily from culinary cliques (the requisite fruity-duck), but if one doesn't think too hard of gustatory history, the dish was so amiable that it was hard to reject. The fennel added a more refined taste that nicely matched the mushroom reduction. 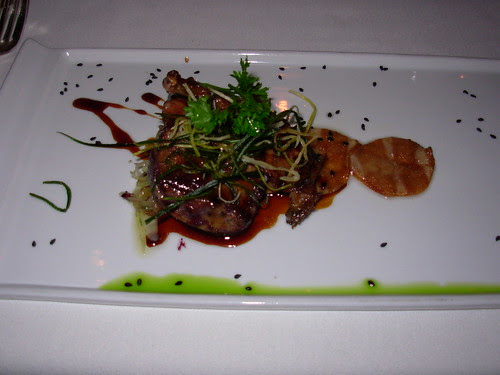 "Winter Carnaroli Risotto with Kabocha Squash, Spaghetti Squash and Chestnut Puree" completed our trio of appetizers. I cannot differentiate Arborio from Carnaroli, but the mix of ingredients was another toast to winter, and the chestnut was a melodious refrain of the soup. Risotto needs to be properly portioned so as not to dominate the meal, but to be more than a tasting, and the small timbale of grain and squash was filling without weighing heavily. Provocatively demonstrating Chef Velasquez's brave facility, a flash fried, feathery basil leaf stabbed the mold. Breathless. 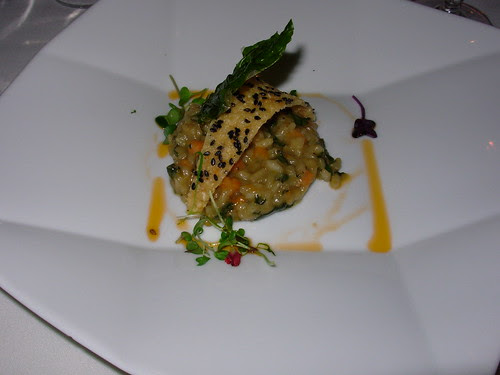 Passion Fruit-Mandarin sorbet surprised by its refusal to sooth the sweet-tooth. As a good palate cleanser must, it awakened my mouth in its firm and unyielding tartness. The mandarin was a puckery and mighty taste.

We split entrees. I selected - from the a la carte menu – "‘Roulade' of Muscovy Duck Breast with Veal Sweetbreads, Baby Shiitake, Duck Confit Stuffed Baby Bok Choy, and a Vanilla-Seven Spice Reduction." This ‘roulade' was striking in its presentation, and complex in its flavor. I was less taken by the flavor and texture of the stuffed bok choy, but it was an interesting conceit. The duck and sweetbreads made for a startling pairing, and the vanilla reduction was impressively aromatic. 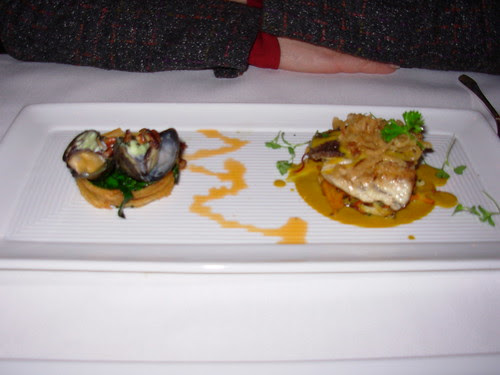 Better yet was my wife's choice, "Pumpernickel Crusted Barramundi (Australian giant perch) with Pumpkin-Lobster Reduction and Diver Sea Scallop Stuffed Mussels with a Sage Beurre Noisette." Let me be succinct: the barramundi with its napping of pumpkin-lobster was one of the most tremendous dishes of the year, a combination of tastes that I will not soon forget. It was brilliant. The scallop stuffed mussels was another of the chef's conceits, but a very tasty one. But that barramundi with its supremely opulent lobster reduction married to the compliant pumpkin's slightly bulky sweetness! Wow! 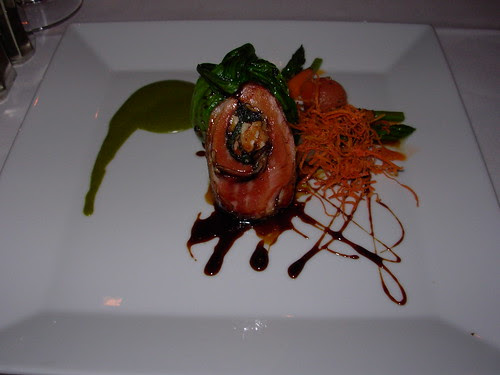 And now, sated, perhaps we were secretly transported to some eatery down the street. Never have I eaten so well under the hands of the chef and been so dismayed when handed off to the dessert crew. When I asked our server of the pastry chef, not listed on the Carlos website, he responded "Elizabeth." Could she be in the witness protection program? Let me not be too harsh. Perhaps we are in the hands of a novice or a gifted cuisinaire on a bad hair day. In truth, the desserts were neither more or less distinguished than dozens of suburban establishments.

We begun with a "surprise dessert." When my wife tasted her profiterole, she muttered that it was stale (or stale-ish). Could this have been the surprise? She might have mentioned that the vanilla ice cream was both over-frozen and under-flavored. She could have noted that the chocolate sauce seemed wan, thin, and ordinary. Aside from an odd pair at Le Bernardin, never had I had two dishes in sequence that traveled so far from zenith to nadir. 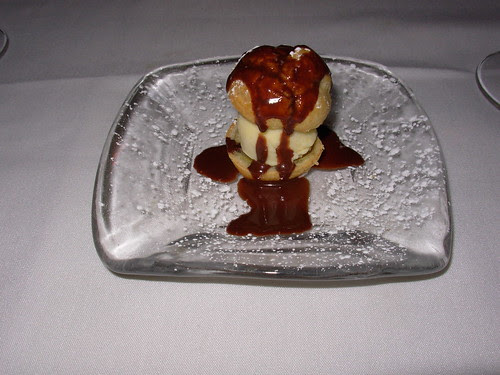 The sympathy of desserts were only better in comparison. None of the trio were distinguished. The almond tuile with orange ice cream was characterized by more overly frozen custard with a somewhat bitter off-taste. The small cube of pumpkin-chocolate layer cake was less distinguished that cakes found at the better bakeries. The tiny ramekin of Vanilla Creme Brulee was smooth and sweet underneath an overly firm crackly crust. The concluding the petits fours were serviceable, but did nothing to save a disappointing end. 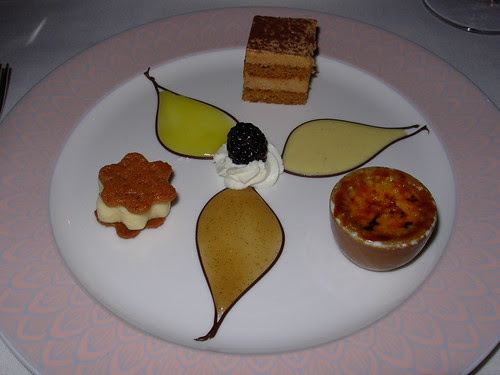 We are in the midst of the age of sweets. Here in Chicago (think Mindy Segal) and in New York (think Will Goldfarb) dessertistas are laying down markers. I'll assume that our evening was an off-night, but, if not, a restaurant that is as wise, as happy, as creative as Carlos should wise for us to gasp at the end, not to yawn. A chef as gifted as Velasquez deserves a Goya or Picasso at his side. If not, at least we could have been presented with a lagniappe of candied foie gras for the trek to Rogers Park.