The fundamental problem that Courtright’s faces can be summarized in two words: Phil Vettel. Courtright’s is a beautifully situated restaurant with an extremely lovely scenic background, located in Chicago’s southwest suburb, Willow Springs, a community not know for the quality of its culinary adventures. 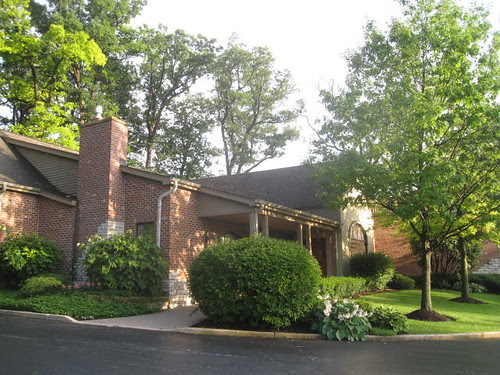 Phil Vettel, in contrast, is the long-time restaurant critic of the Chicago Tribune. He has been at his tables since 1989, which should be punishment enough. He is not a bad critic, just a generous one. Phil Vettel is a man as promiscuous with his stars, as Tiger Woods is with his starlets. Indeed, if he would only lay off the caffeine while typing, taking most reviews down a notch or two, he is generally close to the mark.

On June 10, 2010, Vettel stunned culinary Chicagoland by awarding Courtright’s four stars, his highest rating. While Vettel has been generous with three stars, he has maintained some discipline with the quadra-fecta. Only six other restaurants in Chicago have received this notice in the past decade: Alinea, Everest, Spiaggia, L20, Avenues, and Les Nomades. A case can be made for all six (although I have some doubts about Les Nomades and L20). Courtright’s is in pretty exalted company. Among the restaurants that did not make the cut were Trotters, Tru, Blackbird, and Topolobampo.

Dishes at Courtright’s are described as dazzling and extraordinary. Such bubbly euphoria calls for some skepticism and for a visit. And so my wife and I made the hour-long drive to Willow Springs on a recent Friday, awaiting their special tasting menu. Courtright’s Friday tasting menu is an homage – although a somewhat wan one – to Iron Chef. Chef Jerome Bacle, formerly with Le Bec Fin – a favored restaurant of mine in Philadelphia – selects an ingredient and them constructs a three-course menu around it (with a few extras) for a mere $35 (the regular three course menu is $55, and there is a five-course tasting menu for $75). On the night we dined, the ingredient du jour was melon, but it has been apricot and jicama and kiwi.

Perhaps you can imagine the problem with this strategy. The special menu is a cross between a loss leader and the chef’s aesthetic vision. Which is it? At this price point, the dishes seemed far from luxe, and being served only once, the problems of the dish were never worked through. While the meal was not without its pleasures, the meal that I was served was not four-star quality, the interior décor is not stunning, and the service, as even Vettel admits, was more sincere than flawless.

So, what’s up? The answer, apparently, is deer (Vettel’s writerly theme du jour). Not venison, but Thumper. Vettel is taken by Courtright’s setting, seduced by the woods. I agree that the garden is splendid. But those of us who live within hailing distance of the forest preserves have our eight p.m. deer, and I believe with a critic’s eye that my wife’ cookery can give Chef Bacle a run for his money. Let me invite Phil to dinner, where not only can he watch our twilight deer, but as soon as Chicago’s gun ban is lifted, he can shoot it as well. Bambi on the barbie.

While the view out of the picture window is surely becoming, the view from within is rather ordinary. Vettel describes it as spotless, which is something less than inspiring, but is reasonably accurate. The service, as noted, is good-spirited. The staff seemed uncertain about when to remove our plates, I was served bread when my wife was away from the table and the server never returned until we requested, and the waitress stepped on my shoes once or twice. Vettel admits he can’t call it flawless (apparently wine was spilled on his tablecloth), but that should be a hint when the comparison is with the service pros.

Then there was the food. If the special menu is the height of perfection (Bacle’s “creative best”) it is a good-size prairie hillock. While I enjoyed the meal for the most part, I was never stunned. The photos reveal a chef who needs a greater attention to plating or a more modest critic. Of the dishes the most assured was the amuse: a combination of balsamic vinegar, fried leeks, edamame, and corn. It was a most pleasant summery mix.

The appetizer was a Watermelon, Crab, and Avocado Salad with Mango Dressing. The dollop of avocado was a happy mixture of mashed and pureed green. It was matched on the other side of the dish with a mix of crab and watermelon. This was a good watermelon, but not a watermelon at its amazing peak; good crab, but not great crab. The smear of mango didn’t add to the plate’s curb appeal. 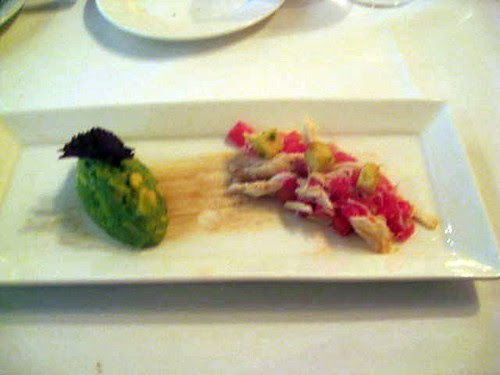 Our main course was Grilled Shrimp with Wrapped Prosciutto, Honeydew and Ricotta, Roasted Pineapple, Basmati Rice, and Coconut Basil Sauce. I endorse the coconut basil sauce and the shrimp were fine, but the ricotta cut the tang of the honeydew. It was an unfortunate match that perhaps would have been altered on a second night. The presentation on the plate was far less interesting than the rocks and flowers. The touches that one expects in haute dining are missing at this sturdy local spot. 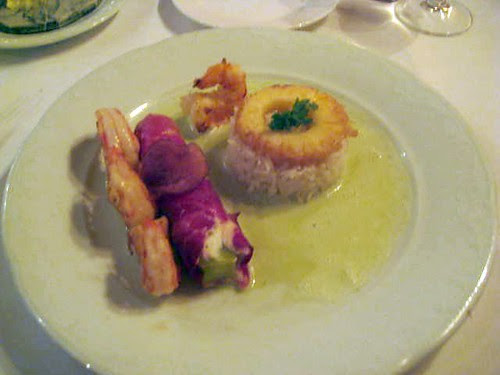 Dessert was quite tasty with the mix of cantaloupe and port wine in a summer pudding. Again the chef is somewhat done in by his plating. No amount of dots and spots can make up for a brown glob at the center of the plate, however enjoyable that glob might be. 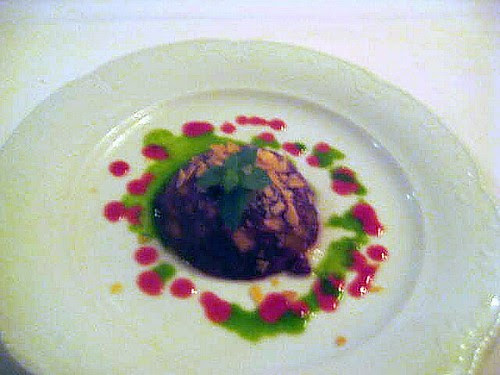 It is surely true that had it not been for the Tribune’s review I would not have trekked to Willow Springs. But had I been inveighed to visit through other means, I would not have been attempting to justify the stars.

Ultimately Courtright’s is a fine suburban restaurant with a most comforting view. It deserves patronage, and Chef Bacle is to be commended for working within the constraints of stressed customer budgets. With any restaurant, expectations are key, and it does no good to imagine that this can match the suburban trio of Tallgrass, Vie, and Carlos. So, Chef Bacle, you deserve praise, but remember that your enthusiastic friends can be as dangerous as those who turn their backs.