Anyone who has spent time in the sweaty kitchens of haute cuisine haunts knows that Ecuadorians are South America’s gift to North American diners. So many kitchens workers in New York, Chicago, and elsewhere hail from this small land, the size of Nevada, but without the sand and glitz. In a recent visit to Ecuador I searched out Ecuadorian haute cuisine. I can report that I discovered such an establishment, an astonishing one, although a restaurant whose innovative chef, Alexander Lau, hails from Peru, Ecuador’s prickly neighbor to the south. 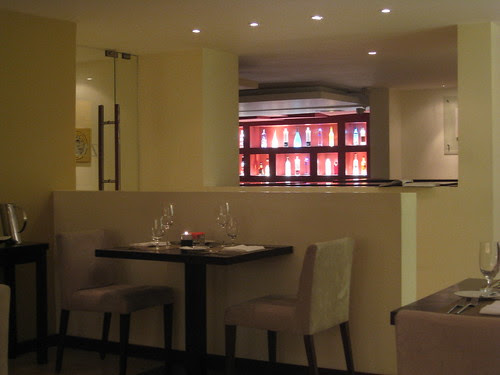 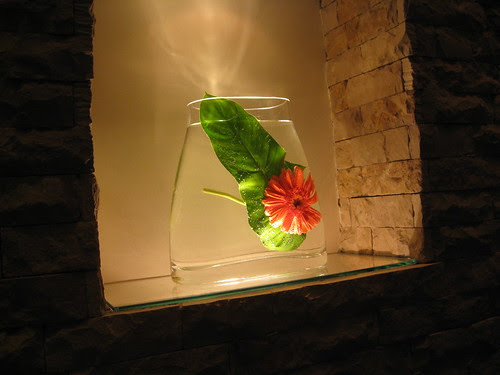 After a misguided first night culinary adventure in Quito, I came upon Zazu, and not willing to leave my good fortune to the vagaries of Ecuadorian cuisine, I returned the next night, the first time as a grazer that I have eaten back-to-back meals in any restaurant. (This post recounts the first meal: photos from the following night are on my flickr.com account).

Ecuador decided some time back not only to peg its currency to the U.S. dollar, but actually to use American currency. Americans need not change money. This decision no doubt seemed wise in the age of a strong dollar, but today Ecuador is a value for American tourists, no more so than at Zazu, where a full seven-to-nine course tasting menu costs an astonishing $35.00. Most of the wines poured (Chilean, Argentinean, Spanish, and an untasted Ecuadorian wine) are priced at about $30.00.

We were particularly fortunate in selecting Zazu on a lazy, summer Monday night. For much of the evening the stylish, contemporary restaurant was nearly empty, and we received considerable attention from the waitstaff and the chef, including an invitation to explore the kitchen. The tasting menu consisted of nine courses, each stylish and most spicy. I don’t believe that I have ever had a tasting menu flavored with so much heat. (The tasting menu the following night – a busier, peppier evening - had some wonderful dishes - including a sea bass in coconut sauce, langoustine in piquant sauce, and shrimp in a honey-chili sauce - but was less thematically coordinated, and as an evening repast slightly less satisfying).

Dinner began with a simple amuse, Pangora (Pacific) stone crab set on a small round of avocado with bits of lettuce and tomato on a quiet Zen-like platter. Unlike much of the rest of the meal, the taste was cool and sweet without a hint of spice. The dish was impressively restrained and the ingredients were sublime, but the taste revealed little of what was in store. 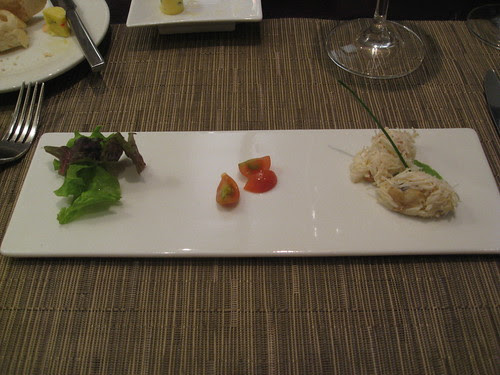 The second dish was inspiration: raw sole with a parmesan sauce: a cheesy sushi with chili peppers. I admit that the vision of the dish may not be what one expects on a restaurant plate, at least when one is able to keep one’s food down. But this is a dish that can be eaten up, down or sideways. Raw fish, cheese sauce, and chili: this dish is doomed to failure, except for the fact that it is so glorious in its surprises; so lasting in its memories. I fell in love with Chef Lau. At its best his cuisine has the power to reimagine cuisine. Never have I witnessed a top chef pack so much heat. Not weeping heat, but a mix of classic and hot. 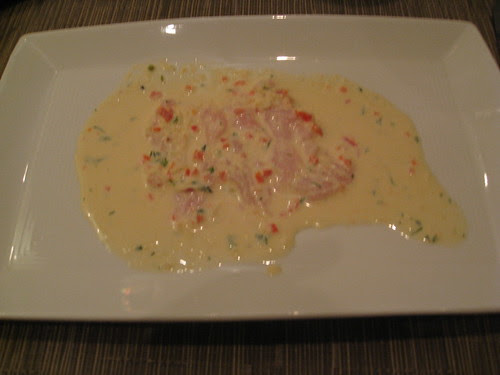 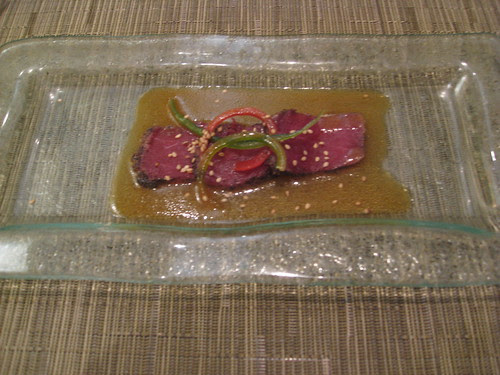 Fourth course was a perfectly tender Calamari, stuffed with shrimp, drizzled with a Ponzu sauce and more hot peppers. While such a string of chilied dishes might seem redundant, they never did. Each had its own flavor profile and its own set of culinary references. 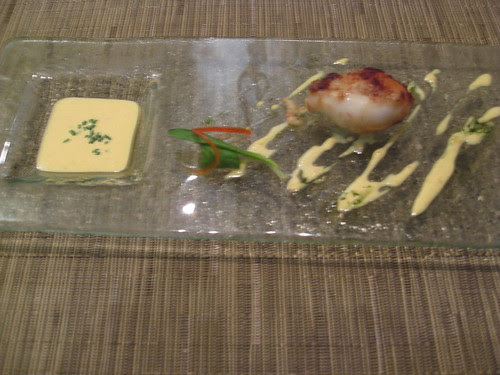 The fifth plate was a seafood composition: shrimp, grouper, octopus, and calamari with tree tomatoes (a common Ecuadorian vegetable), garlic, and some more peppers. While the grouper was slightly overcooked for my taste, the dish followed the piscatorial theme of the dinner. The dish was well-designed and enjoyable – and exotic with the fruity tomatoes - if not quite so imaginative as several preceding dishes. 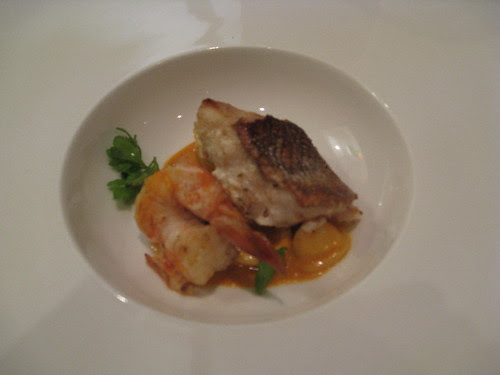 Sixth course was prawn tempura served with a spicy mango salad. This dish, elegant, composed, spicy, represented the heart of Chef Lau’s cuisine. He draws upon Asian and Latin ingredients and flavors but with a classic sensibility. While the dish was not as dramatic as his sole sashimi with parmesan sauce, it was astonishing in its creative simplicity. 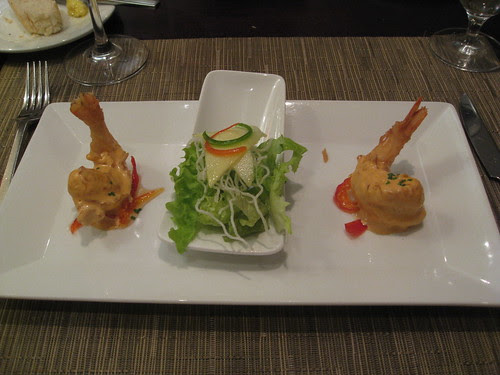 Our seventh course was aged beef tenderloin with green peppercorns served with a dill and caraway sauce and green salad. On this plate the pungency did not come from heat but from the other side of the pepper world. The beef was nicely undercooked and enriched by the depth of the source. 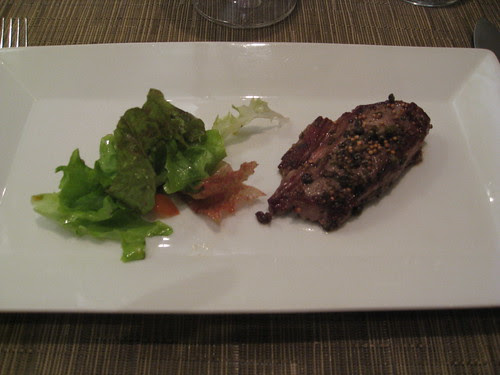 The finally entrée course was an ossobuco, served on risotto with asparagus tempura. As with the opening course, an enveloping mildness characterized this plate. While ossobuco can be heavy in the wrong hands, this small plate was surprisingly airy and well-portioned. 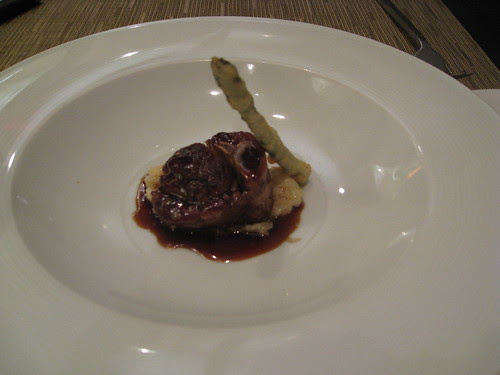 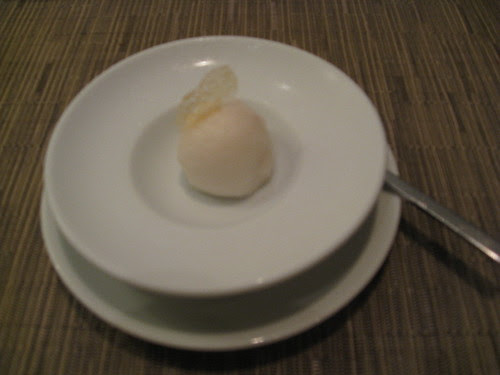 Desserts, while successful, are less stunning (and were also slightly disappointing our second night when I was presented with a sampler of desserts, none of which was a knock-out). I enjoyed a vanilla panna cotta, served with a salad of raspberries, strawberries, and mint. I wished for a more tropical or peppery ending or one with greater surprise, but the dessert was sweet and light. My wife received a chocolate panna cotta with berries, served on a cinnamon crumble. Nice indeed, but without revealing the pastry chef’s magic art. 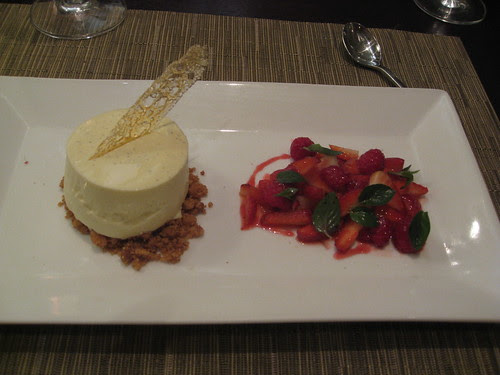 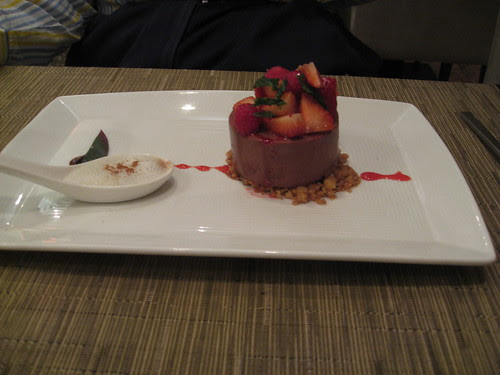 Not each dish is equally stunning, but dinner at Zazu was a revelation: a wise, generous and zippy Latin cuisine with Asian and European influences. Chef Lau is an important chef in Ecuador and in the global culinary world. With a wave of tourists soon descending on Quito for the 150th anniversary of The Origin of Species, hopefully Chef Lau and Zazu will receive their due. This most fit restaurant deserves to survive and prosper.