Out of the Way – Pacific’s Edge – Carmel, California

Some restaurants are so fortuitously sited that the wisest thing that a chef can do is to stand out of the way, not blocking the diner’s line of sight. This is the challenge of Chef Matt Bolton at Pacific’s Edge.

The Pacific’s Edge restaurant, located in the Hyatt Highlands Resort in Carmel-by-the-Sea, has an astonishing view. It was named as one of the ten best restaurants with a view by USA Today in 2006. The award is deserved. Looking out over, yes, the Pacific, the restaurant remind us just how fortunately those living on the coasts can be, and with its high perch even a tsunami would not diminish the romance of dining. All tables have a view of the Pacific, but some are nestled up against the windows, awarded on a first-come/first-served basis. We were grateful to have been informed of this policy, allowing us to snag a 6:00 p.m. reservation and a window view. The sunset was not as glorious as some, but was superb none-the-less. 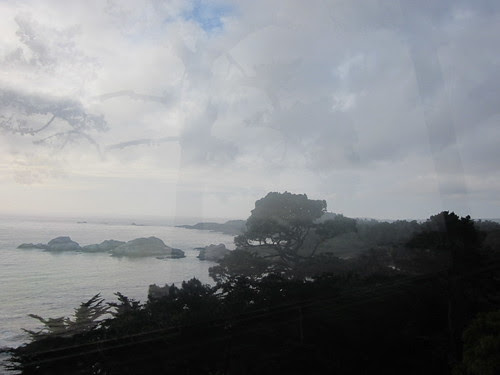 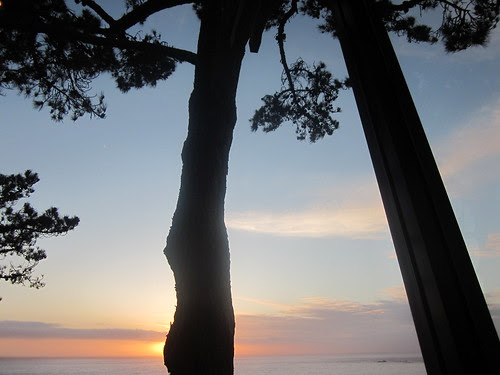 Pacific’s Edge serves well-prepared, if somewhat conventional, modern cuisine. A four-course “tasting menu” ($99/person) is not overly adventurous, but is quite successful, never failing to please.

We began with an Asparagus Vichyssoise with a luscious Truffle Pecorino Grilled Cheese petit-four, crispy spring onions, and prosciutto de parma. While the soup was delightful, the two-bite sandwich was ideal. 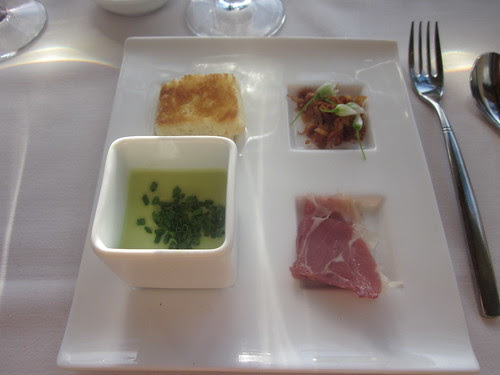 The Wild King Salmon with Olive Oil Poached Artichoke, Oven Roasted Tomato, and Chanterelle was a pleasant, properly cooked piece of fish, if a bit minimalist. 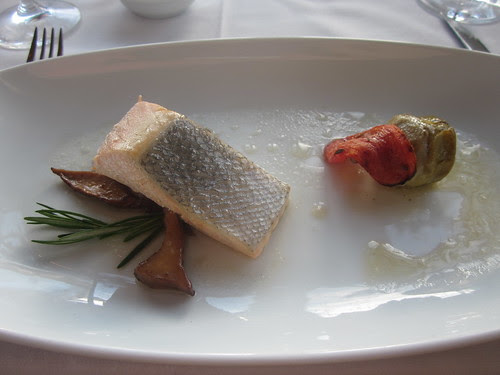 Our main course was a well-conceived, evocative Pan-Seared Breast of Sonoma Duck with a five-spice pastilla (fried duck confit basket), English Peas and Shoots, and Duck Jus. The pastilla was unfortunately greasy, but the rest of the dish was sturdy and warmly evocative of a California April. 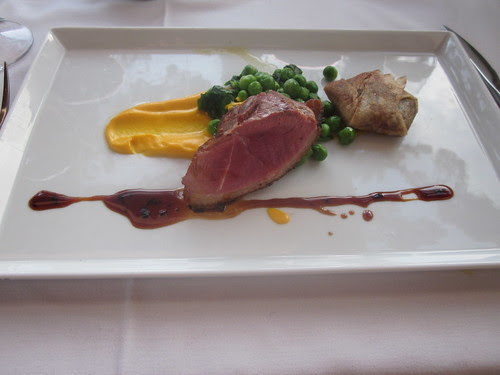 Dessert was a Meyer Lemon Semolina Cake with Pine Nut Sable and a sparkling Raspberry-Rosemary Sorbet. While this was not an elaborate creation, it was creatively presented and flawless. 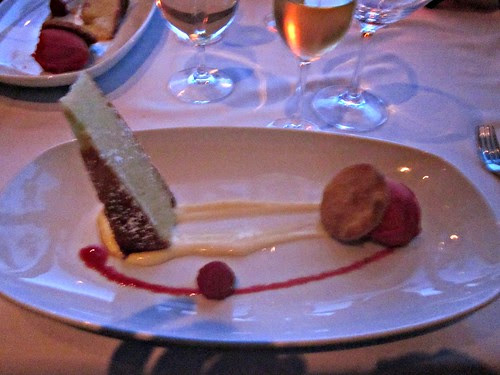 Few things can be more depressing for an ecstatic lover of ecstatic food that to dine at a Chinese restaurant alone. So many possibilities, so little to share. From a list of hundreds of dishes, the lone diner plays the lottery.

Without a large network, I have been Chinese-cuisine-deprived during my year in the Bay Area. But not entirely. On a quiet Tuesday an email popped into my inbox announcing a “chowdown,” sponsored by the San Francisco branch of Chowhound. In contrast to the LTH community in Chicago, these invitations are rare and rather select: twelve diners sitting around a table. It is a tough reservation to snag. And so I jumped at the invitation.

One of the favored restaurants of the Bay Area foodie community is Yum’s Bistro, located in a suburban shopping mall in Fremont (in the East Bay, across the Dumbarton Bridge from Palo Alto). The diners of SF Chowhound had previously held their New Year’s Feast at Yum’s, a restaurant that is Cantonese, broadly speaking. The chef had previously cooked in the Grand Hyatt Hotel in Hong Kong and in large Chinese restaurants in San Francisco, but had retired. But retirement is not all that it is cracked up to be, and he decided to open a modest “bistro” in Fremont (although the Chinese meaning of bistro is somewhat obscure). The menu advertises their “exquisite crab dishes.” April is edging towards the end of Dungeness crab season on the West Coast, and my colleagues speculated that the sweet crab was from Washington State or beyond, but none the worse for its travel.

The organizer of the event is the estimable Melanie Wong, San Francisco’s answer to Cathy2, and she has been involved in the local chow community for so long that she recalled the breakup of LTH and Chowhound, casually referring to our Chicagoland rebels as “the Boys” (sorry, Cathy, I am just the reporter). As usual the group that gathered was congenial and bright. Aside from the fact that these gatherings are rarer in the Bay Area than in Chicagoland, what struck me most was a greater seriousness of attention to wine culture. Perhaps a dozen bottles of local and international wines were opened, and diners brought their own glasses (like chefs and their knives; the restaurant doesn’t supply wine glasses). The whole evening was good fun. We began with a very flavorful soup, ordered special: watercress, dried scallops, and duck gizzards in a rich liquid. I was particularly impressed with the savory broth. It was supple and subtle, poultry and seafood, as sterling as a French bistro consommé. 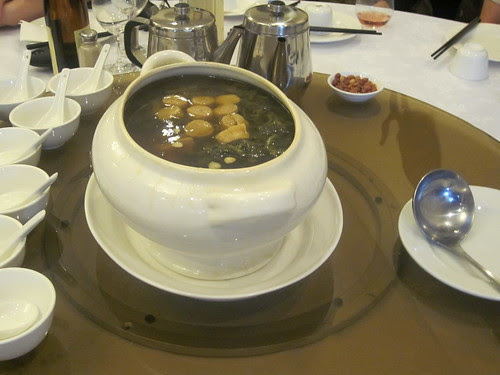 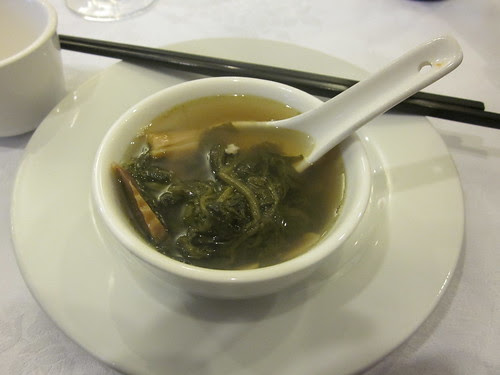 Soy sauce and garlic crab (a special preparation for our group). 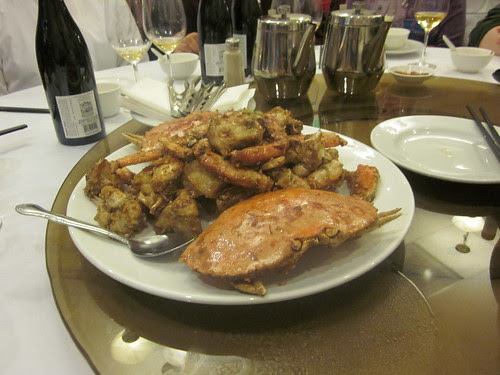 Hunan crab served in a Clay Pot with hot peppers 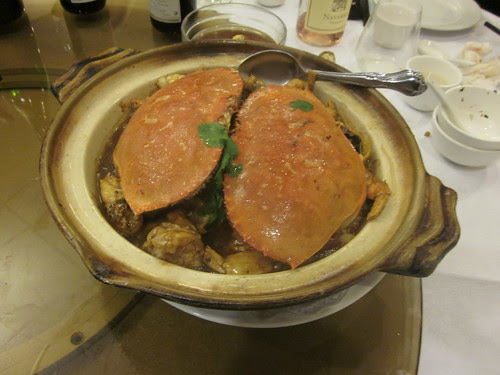 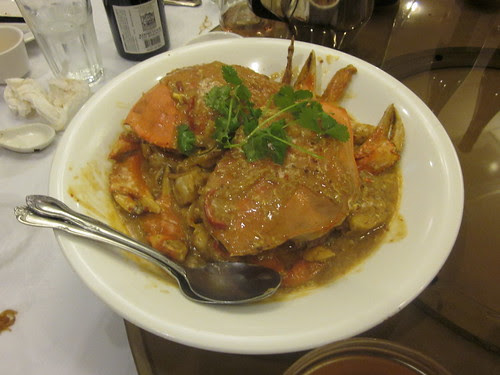 I admired them all. The spice was not excessively intense, but still I preferred the Garlic Crab and the Jakarta Crab for the symphony of flavors. Although one thinks of crab as having a delicate flavor, certainly true, it does stand up impressively to spice. Crab and chili can be a beautiful marriage.

The trio of crab was followed by another specially prepared dish. Stuffed duck, fried and braised, with ham, barley, and nuts. The quality of the duck was not impressive, and the accompaniments didn’t sing either. Despite the impressive presentation, it is not a dish I plan to try again. 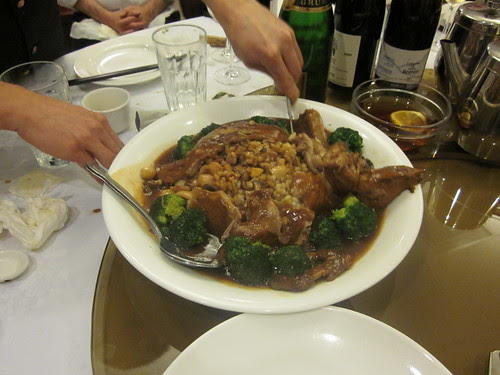 Shifting to the end of the night, we were served Ong Choi, hollowed hearted Chinese greens, sautéed with garlic. It is a green and bright change from protein. Our noodle dish, another special, was Longlife noodles with abalone and mushrooms (one twirls the noodles uncut or one’s life is shortened). The noodles were perfectly chewy and the abalone sauce was delicious. 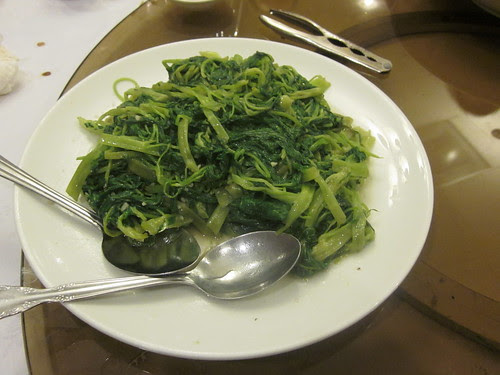 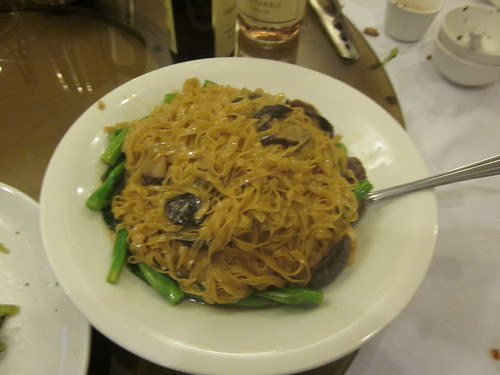 Desserts included peach buns (a roll filled with sweet bean curd) and a tapioca soup. The peach buns were witty and sweet. The tapioca soup was properly made but overly thick for the end of an evening. 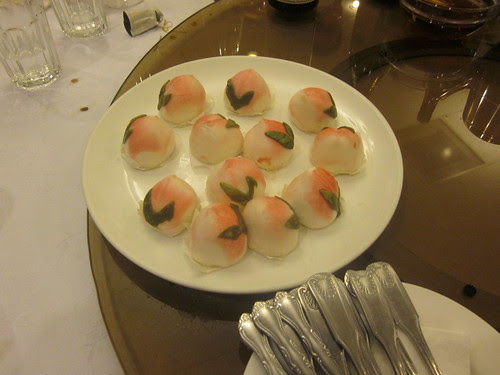 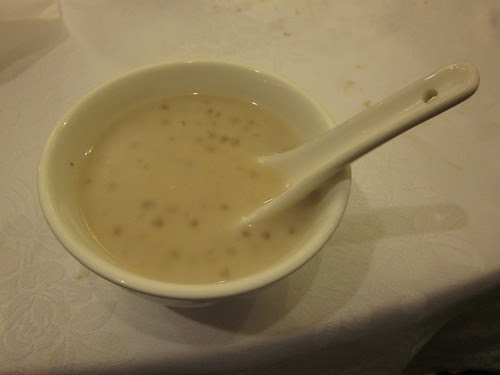 I was grateful to meet new friends and to learn that culinary friendship is not (quite) a Chicago monopoly.

Some restaurants, modest though they seem, are just about perfect. Their humility hides their brio. In San Francisco I can think of no better example than Delfina, a lovely, sunny, airy Italianate restaurant set in the somewhat scruffy Mission District. There is little showy about the space, although it is pleasing and airy, but the plates are modestly priced show-stoppers. 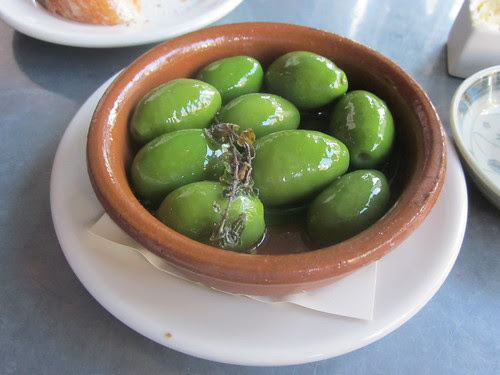 The olives were followed by a creamy cauliflower soup with paprika oil drizzled on top and cumin-scented croutons. The soup was redolent of flowerets, but needed the kick that the paprika and cumin provided. It was an exceptionally pretty bowl. 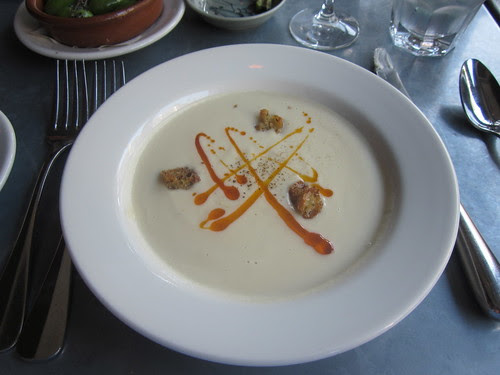 Delfina’s Hay and Straw Tagliarini with English Peas, Pecorino, Raw Egg Yolk, and a touch of Pancetta (or its moral equivalent) was as lush as one might imagine a spring plate could be. The green and white pasta was nettles and spinach (?). The richness of the cheese, cream, and egg played perfectly with the peas, creating a modernist carbonara. 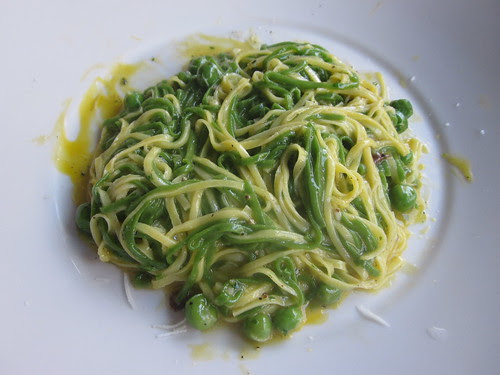 All in all, a splendid moderately priced spring meal. Bravo.