Some months ago in that mix of cuisine and media that is now so common, Rick Bayless was anointed Bravo’s Top Chef for the season. Let me confess that the only cooking show that I have watched with any regularity since the one-time bizarre antics of the galloping gourmet (Graham Kerr) was the original Japanese Iron Chef that satisfied my weirdness quotation for the week. But weird or not Chef Bayless of Chicago’s (and the world’s) Topolobampo (and the more accessible Frontera Grill – and the now über-streetfood Xoco) won the honor. Congrats to you Rick. I was informed by our server that the four savory courses were recapitulated Bayless’s life in food. (I never learned the meaning of the fourth course – or the dessert).

To honor this occasion, Bayless recapped his star-turn five-course meal as a special tasting menu ($90/person) from August to mid-October. While I cannot rate the meal flawless, I was pleased to taste cable entertainment at a suitable distance.

As might be expected, given that the meal reveals his life, the first course was the most juvenile. Bayless’s father owned a barbeque restaurant in Oklahoma (is there any other kind?) and in honor of dad, the chef served “Hickory-smoked quail with Hickory House barbeque sauce and Iroquois cornbread croutons.” The dish might have been appealing to an eight-year old, but the sauce could have come from a bottle. It was sweet and tangy, but that comes with the territory. I didn’t find the complexity of Arthur Bryant’s sage-inflected sauce on this plate. Nothing really wrong, but not challenging enough. The spicy watermelon salad and roasted garlic slaw were impressive, but the course was short of memorable for those who did not share the chef’s life. 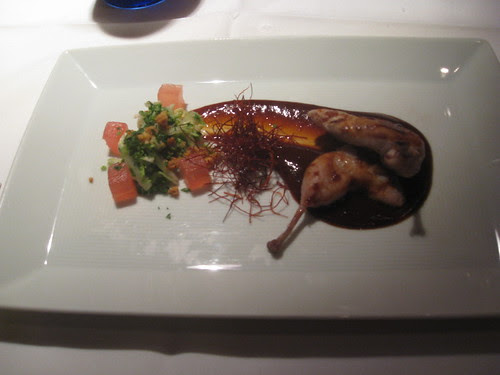 The second dish, reflecting Rick’s discovery of Mexican cuisine was better, but still within a normal range: seared Hawaiian ahi tuna in Oaxacan black mole with plantain-filled tamal, grilled nopal salad, roasted knob onions, and three-nut crunch. (Despite the list of ingredients these “sides” were not as visible as they might have been – often true on this menu). Bayless does make a sturdy, dense, rich, flavorful mole, although it is not sturdier, denser, richer, or more flavorful than the moles at other serious – and more traditional - Mexican restaurants such as Mixteco Grill. While I enjoyed the dish, I wished that the plate gave more attention to the creative accompaniments. 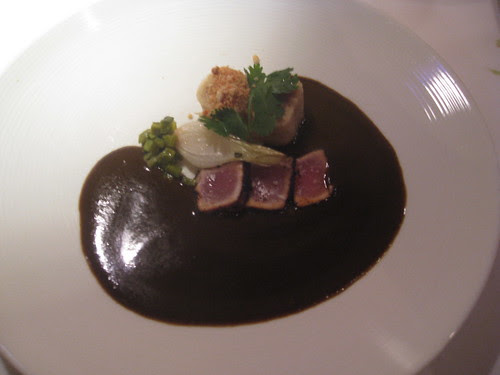 Third – black rice “a la tumbada” with Maine lobster, squid, mussels, grilled octopus, and homemade chorizo in tomato-jalapeño broth with pickled vegetables and prosciutto pearls(!) – was the high-point of the evening. It was an astonishing composition. Again, the chef might have been more generous with the accompaniments, notably the prosciutto tapioca-balls. Still with such rich lobster, there was little need to complain. Here in this food memory the chef becomes a chef, discovering the possibilities of culinary preparation. 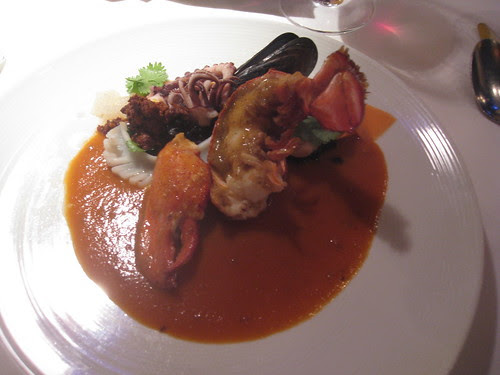 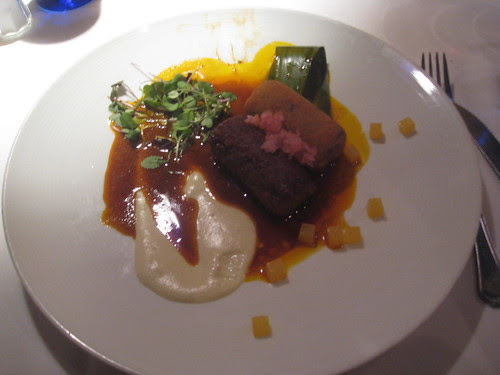 Dessert turned out to be less of a sweet than a teasing savory. Bayless created a warm caramelized tart of camote morado (Mexican sweet potato) with a swoosh of garnet yam (sweet potato and yam both?), spiced walnut ice cream, toasted homemade marshmallow fluff, and tangy caramel sauce. As the description suggest here was a last savory. Yet, its distance from a traditional sugary dessert allowed it to provoke thought. Each piece was well-made and thoughtfully combined. It was a dessert that inspired respect, more than honeyed love. 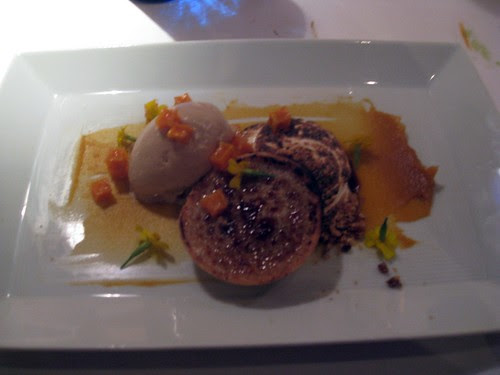 Despite imperfections this menu is the creation of a creative, speculative – if overly telegenic – cook. Topolobampo, not the most expansive of Chicago-four-star restaurants may be the most expansive, and we are lucky to be the home of Bayless and Oprah both – Olympians both.