Despite the claims of Aussies, cuisine (like so much else, it is alleged) is a treasure of the Northern Hemisphere. Wishing to disprove this snippy claim, on a recent visit to the beaches of Rio de Janeiro (a conference on climate), I searched out the restaurant that can lay claim to being the most serious dining spot in Brazil (or at least in Rio). This is Restaurant Roberta Sudbrack, a smart boîte, located in a stylish neighborhood near Rio’s Jardim Botânico. 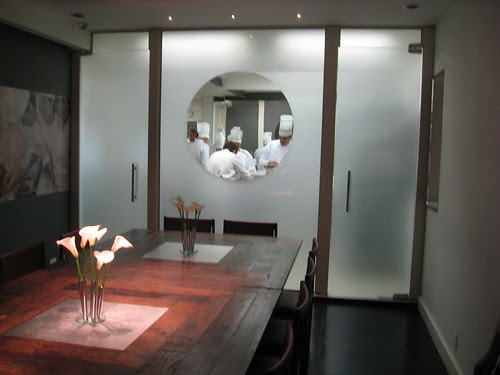 If I expected a nouvelle Cariocan cuisine, it was not to be. Roberta Sudbrack is Chez Panisse’s southern cousin: simple preparations, high quality ingredients, a comfortably elegant but unadorned space, unpretentious service: Berkeley by Bahia. Brazilian cuisine is particularly known for their caloric Saturday lunch feast, the feijoada – black beans, white rice, pork tails and ears, tongue, boiled beef, Spanish sausage – but this was Thursday night and the meal was stripped to its gourmet essentials. In our conversation Chef Sudbrack described herself as self-trained; a cookbook reader – influenced, she claims, by Joel Robuchon, although I saw less of his influence than that of Chef Waters. Chef Sudbrack, if perhaps lacking the requisite apprenticeships, is not without experience. Before opening her eponymous restaurant three years ago, she was chef for Brazil’s former sociologist/president Fernando Cardozo. Perhaps her restrained style derives from having to serve cheeky and picky world leaders. What would you serve Fidel and W?

I have long admired Chez Panisse, although I have never fallen passionately in love with the style. It is too dispassionate, too spare, too Quaker-meeting. Insufficiently samba. Sudbrack is a trip from the tropics, not to them. But this is Roberta Sudbrack’s vision. But given its mantra: local high-quality, organic provisions, simply prepared, it succeeds in its own terms with panache. The menu changes daily, depending upon market availability, a strategy that gives the produce priority over inspiration: imposing, canonical dishes take time to come marinate in the chef’s imagination: not the hours between sunrise and supper.

While the service was generally congenial, after a few photographs of the (three) amuses, our server/restaurant manager requested that I not photograph the food under I cleared it with the chef, due to arrive in a few minutes, and how proved most obliging. As a result, I lack images of two of the middle courses. At a place such as Sudbdrack, the dishes do not scream “look at me!” They are more taste-worthy than eye candy.

Our first amuse was perfectly composed tomato jewels on toast: a mild, clean, clear dish: bruschetta on circles of Holland rusk. This amuse doesn’t waken one’s mouth as much as cleanse it. It was carefully and cautiously prepared, if lacking in drama. 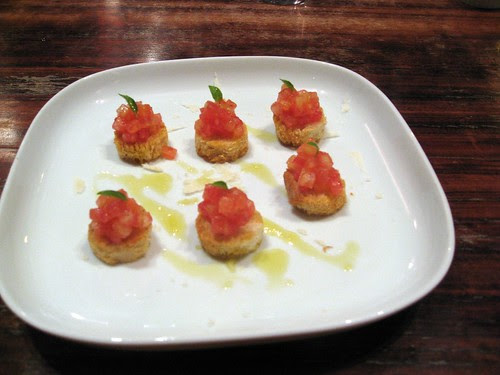 The following amuse was another spare on-toast presentation: Okra caviar on toast. Not a bit of Rio, but subtle without okra slickness. The idea was clever, but the taste, although pleasing, trailed behind the idea. 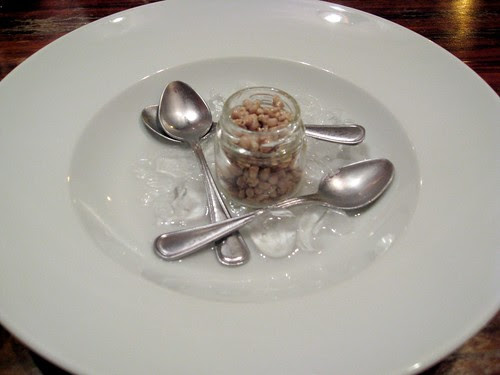 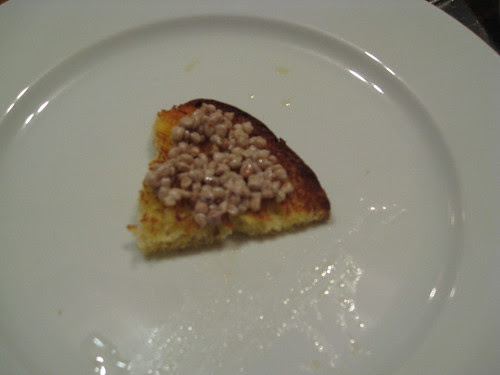 Our “official” amuse was a half-moon of foie gras with small pieces of pineapple and tarragon. What made this dish tingle were added salt crystals. Chef Sudbrack created a plate of smiling texture, even more than inspiring tastes. Although perhaps the pineapple was a nod to our venue, it owed more to a classic cuisine of ingredients. I loved Chef Sudbrack’s preparation, even if I cannot pretend that it was a stunning gustatory innovation.

The first appetizer was a deep-fried langoustine roll with new vegetables. Buttery crustaceans stuffed the crackly cigars. Lush, if reminiscent of high-end Chinese cuisine. These golden cylinders were surrounded by miniature carrots, broccoli, asparagus, green beans, and beets: the bounty of the well-tended garden.

Salt again featured in the next dish: Farm soft-boiled egg with shavings of asparagus surrounded by squares of buttered and salted bread. No dish could be more emblematic of the locavore movement: an egg, some bread, a bit of butter, and timely vegetables: all fresh and new. One will not confuse this cuisine with the fireworks of Tom Keller, Gordon Ramsey, Alain Ducasse, or Grant Achatz, but it was fine and true, reminiscent of New York’s Prune or Chicago’s North Pond. Keep it simple, keep it pure, and they will come.

The main entrée was roasted duck leg, cooked over low temperature, with a lovely and evocative (if not notably Brazilian) cauliflower couscous. This dish could hardly be simpler, yet it was lovely in its delicacy. I could smell the baby cauliflower wafting from the plate as chaste as cuisine can be. 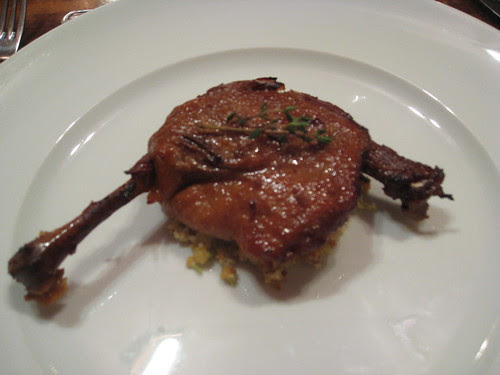 Dessert proved a rich, dense, and naughty chocolate tartlette with an ice cream, memorable for its fluffy egg white texture. Another beloved and straight-forward dish, none the worse for letting flavors speak for themselves. 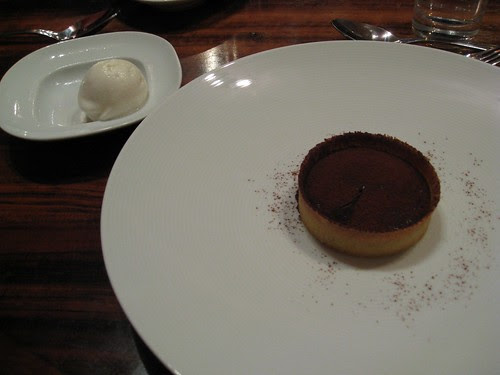 By the close of the evening we no longer expected cataclysms, just the delight of organic, local materials prepared with respect. Perhaps one would not travel half way around the planet, trailing carbon credits, to try cuisine that is available close to home (which is, after all, the point). Still, this truth does not weaken the calm call of Restaurant Roberta Sudbrack for wise Cariocans.